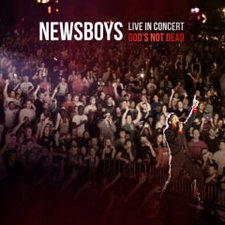 The Newsboys have certainly stayed busy in the past couple years. Along with a bevy of newly recorded material, the foursome, led by dc Talk's Michael Tait, keep themselves fully enveloped in various tours and festivals, giving an outlet to their bounty of musical energy. To commemorate their appearances on stage, the Newsboys have recorded their shows from two tour dates from earlier in the year in the form of Live In Concert: God's Not Dead, and its liveliness is its main strength.

For song selection, Live In Concert: God's Not Dead nails it with precision. When looking at the tracklisting, it could be a little disheartening at first to see quite a few old Newsboys favorites left off the recording ("Breakfast," "Entertaining Angels," "Shine," "Million Pieces [Kissin' Your Cares Goodbye]," and far more). But for any CCM fan who's been living under a proverbial rock for the last few years, this is a band that's Newsboys mostly in name only, and only two songs here hail from the Furler days. And while some may have gripes about "Jesus Freak" being performed yet again, it has become a staple of the Newsboys live show and lets the album authentically represent the band as they are today. This album is the band, yet again, showing their renewed aim and musical philosophy.

Besides "Something Beautiful" and "He Reigns," it's split down the middle between Born Again and God's Not Dead, and the focus is obviously on the newest incarnation of the Newsboys and barely at all on the pre-Tait days. With a live recording from the "Furler era" only four years old (Newsboys Live: Houston We Are GO), this precludes the need for much overlap between old and newer material. In the end, it's meant to be a more worshipful mix (in line with the latest Newsboys album, God's Not Dead), and with that in mind, every song makes absolute sense to be included here, especially when blatantly corny songs like "One Shot" and "When the Boys Light Up" are thankfully left out. But with worship songs like "Your Love Never Fails," "Nothing But the Blood," "Mighty To Save," and "Revelation Song" all in tow, this album lends itself to better replay value than many other live worship recordings on the market (with a few Newsboys essentials for good measure).

But even the best tracklisting can sound less than professional if sloppily handled, and this caveat is more than avoided. One of the key aspects to any live recording is the high excitement level, and Live In Concert: God's Not Dead gets it just right. Back a few years ago when Newsboys fans feared the worst with Peter Furler's exit, Michael Tait stepped in to take things in a new direction, and despite the debatable quality of their musical pursuits, his live stage presence is among the best in the industry, and even just from the audio, the listener can tell that he's calling the shots to make the show immensely memorable for those present. Even with goofy quotations like "I want everybody moving side to side just like this; like one big black gospel choir with a lot of white people from Minnesota" or "that's exactly how we do it in the chocolate church," the character works to the make live show truly theirs. But what's remarkable is that he can keep the energy up without sacrificing vocal clarity, which is absolutely crucial for a live album. Without completely mimicking the studio recordings, he keeps things interesting in a way that's audibly appealing and worthy of a separate recording, and the backing vocals from Jody Davis and Jeff Frankenstein, plus the crowd reactions, are at just the right level for maximum impact.

Ever since the "new" Newsboys hit the scene almost three years ago, there have been more than enough criticisms to go around about the new band's approach and style. But the band's live show has always remained as a mainstay in the circuit, and especially to those who have witnessed the Newsboys in a live setting, Live in Concert: God's Not Dead stands as a testament to that excitement contained therein. Excellently mixed, worshipful at the heart, and invigorating to the senses, Live In Concert: God's Not Dead is a live project well worth experiencing.

Newsboys version 3.0 (you remember first lead singer John James don't you?) shows no signs of slowing down any time soon. Live In Concert: God's Not Dead finds them capably delivering a batch of songs from their last two albums (with a couple of older songs included) to enthusiastic crowds on their most recent tour. "Your Love Never Fails" contains the same dancy bounce the Newsboys have been trafficking in for more than twenty years, and would no doubt have made for a rousing crowd "jump along" number. The same could be said of "Save Your Life" and "Born Again."

The Newsboys made a good choice in making familiar Christian Music veteran Michael Tate their new front man. He works the crowd like a seasoned veteran, alternately leading the crowd in worship and telling the same kind of tame jokes (including marveling at the sheer number of white folks in the Minnesota audience that night) that have endeared him to crowds for years. He makes older Newsboys hits like "Something Glorious" and "He Reigns" his own without trying to match notes with former lead singer Peter Furler.

All in all, Live In Concert: God's Not Dead serves as a nice marker for a night or two of energetic worship with the Newsboys. - Tincan Caldwell, 10/21/12