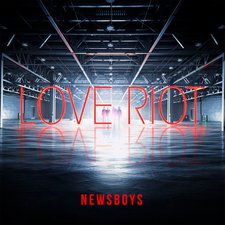 
When a new artist releases an album, they have the unique position of being evaluated, considered or listened to chiefly in the context of that music. But when an artist has achieved the accolades, history and success of someone like the Newsboys (in all the band's iterations over the years), then each release is immediately stacked next to other beloved entries in their canon of music. This is almost unavoidable (it's the reason there is a fan base in the first place), but it's not necessarily a bad thing. A helpful metaphor is a movie franchise. When a new James Bond, Star Trek or superhero film is released, it is both attended and analyzed because of its connection to a greater body of work. A good entry reminds the viewer of why they liked the series in the first place, while an inferior chapter might disappoint. But a disappointing entry does not usually deter the film-goer from lining up at the box office the next time.

By that metric, the Newsboys' Love Riot is a worthy addition to their recent body of work, and a high-energy, heartfelt and tuneful slab of rock and pop with big-budget sonics and memorable songs. With more emphasis on rock and roll than last album, Restart (which had a successfully achieved club music vibe), Love Riot wisely tees up "Crazy" as the album's lead track, and best over-all moment. With some great lyrics about the "crazy" nature of Jesus' teaching (the first being last, giving up your life to find it, loving your enemy) and a rocking vibe reminiscent of "Jesus Freak" (particularly in the chanted coda "some say crazy, some say odd, I say child of the living God"), "Crazy" is the kind of infectious youth group anthem that the Newsboys have a historic knack for. It will no doubt be a great concert moment for many years to come.

Next track "Hero" rocks just as hard, and explodes into its chorus, with Michael Tait showing why he has one of the best voices in popular music. With a slightly off-kilter time signature, "Hero" is a nice turn from the dance-pop that usually fills this spot on a Newsboys record. The following title track continues this trend, with a chorus and statement of purpose that's not as obvious a song as might be expected, but clever and well-done none the less.

Current radio single "Guilty" features a tuneful build and resembles recent hit "We Believe" in structure. The song loses a few points for a slightly-hackneyed lyric about being politically incorrect (the idea of believers being thoughtful about what we say and how we say it is not all bad but that's a discussion for another time). The song does punch home its theme of boldness with verve and style.

The album unfortunately bogs down in the middle with several good, but similarly tempoed songs. The worshipful "You Hold It All," "No Longer Slaves" and "Family Of God" are all nice songs that unfortunately sound a bit too alike to stand out. "Family Of God" and "No Longer Slaves" both make great use of choirs to build emotion, but the back to back sequencing robs them (slightly) of their power.

Thankfully, "Committed" and "Earthquake" shake up the material somewhat before the ending "What I Want Them To Say" brings things both musically and thematically to a close. With the theme of boldness (a Newsboys long-term theme, it's even in their name) again taking center stage, "What I Want Them To Say" is a great album closer, with a good beat and a great vocal performance from Tait.

Love Riot does what an entry into a veteran band's catalog should do; it reminds you of what you liked about the artist in the first place while adding a few more moments to savor.

The newest addition to the Newsboys' impressive collection, Love Riot, pulls itself away from the club inspired tunes of its predecessor and focuses heavily on the pop/rock sound the band is affectionately known for. The title track, for instance, sounds like a cut straight from the Peter Furler-led Go, and the entire album just has the feel of a genuine Newsboys record, something Restart severely lacked. That's not to say elements of Restart are completely absent, or that it is only a copy of prior records. "Earthquake" is an immediate highlight that has the fingerprints of EDM all over it, and it's when the album finds its own identity that it really shines. "Family of God" is an excellent example, filled with lyrics we can all relate to, "I know ya thinking... you're the only one, I see you hiding out 'cause of what you've done... you can come on home. You're no stranger, yeah, you are known." The album does lose its step a few times by leaning a little too heavily on the generic, ("Guilty" and "You Hold It All" being the most glaring examples), but Love Riot is an overall fine addition to the Newsboys' wide catalogue. With just enough of the old and new to satisfy fans of both, there's little reason to pass up on the action. - Review date: 3/2/16, Lucas Munachen

Even though the Tait era of the Newsboys doesn't have the same quirkiness and weightiness as the older Newsboys, you can always count on them for a solid pop album with anthems for living a life sold out for Jesus. Michael Tait's powerful vocals, strong musical performances, and just enough stylistic progression from Restart combine to make Love Riot a a must-have for Tait-era Newsboys fans.
- 3/1/16, Christopher Smith of Jesusfreakhideout.com