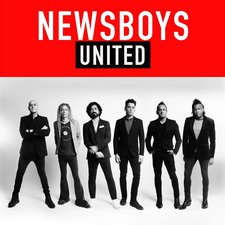 
Newsboys United, a "Frankenstein" experiment of dual lead singers from different eras of the band, has exceeded probably even the biggest of expectations for all involved. Fans, new and old, have responded with great enthusiasm, causing the boys to book additional shows, completing over one hundred and fifty dates over the past two years. Among those shows was a turn headlining the popular Winter Jam tour this year in 2019. Inevitably, an album was bound to happen, and the ten songs on their joint effort, United, is the resultant offering. Perhaps the biggest question upon hearing of an album was how would the melding of styles between Furler and Tait work when combined on new compositions. A live setting is one thing, with enough of their own eras to divide them pretty evenly in the concert; but would they find a way to blend two distinct voices, musical directions, and writing styles? Or would listeners get an uneven album of two halves so to speak?

Interestingly enough, the answer is neither, as the band chose to utilize outside writers for the most part. Over twenty different co-writers in fact, with longtime songwriting team Peter Furler and Steve Taylor among that count. At first blush, this isn't a bad thing, as many artists rely on outside writers to produce their next hit, but it does strike this reviewer as curious with so much writing talent available within the band. So does it work? The nuanced answer lies in what you as the listener were hoping for from United. If the quirky pop and witty lyricism of their 90's output is your greatest hope, then you will leave disappointed. However, laying aside that expectation, if the worship leaning direction that Furler fronted, with doses of Tait's era, are your preference, you will find a lot to like. The best of examples of these song types would be the trio of previously released singles, "Greatness Of Our God," "Symphony," and "This I Know." Each is a catchy, worshipful, pop earworm, and you will find yourself singing them long after the music fades. "Greatness Of Our God" begins with Furler leading, and Tait taking the second part of the verse where he proclaims, "But there is only one God Who can save the day/So clear the stage, prepare the way/Cause Heaven and Earth are singing." Following immediately with "Symphony," they reverse the order of lead singers, producing another winning formula for a hit song, as they unite in the chorus to sing, "so let my life be/let my life be a symphony/a symphony/every breath that I breathe/Lord I want to bring you glory/all for your name/all for your grace/all that I am ringing out like a melody." The only true ballad in the mix is the Tait-led "Beautiful Story," and on it, his voice shines as he reminds listeners that, "You work all things together for good/just like you said you would." A strong U2-like lead line anchors the chugging "This I Know," as they sing the rousing chorus, "This I know/At the whisper of Your name/There is peace I can't explain/I am fearless, I am safe/Here with You, here with you."

Two other songs bear mentioning as highlights, and that would be the closing duo of "Only The Son (Yeshua)," and the cover of Bryan and Katie Torwalt's song, "Set Me Ablaze." Furler takes lead on both, with the former having a Go/In The Hands Of God era Newsboys drive to it, declaring, "We worship You/in Spirit and truth/for all you've done/and all You'll do." Rounding out the tracklist, "Set Me Ablaze" has a killer chorus that soars with lines like, "breathe/come and breathe on the coals of my heart/let your fire start in me/come and breathe on the coals of my heart/keep me burning." The song comes across as passionate, hair-raising, and a fine way to cap the album.

With all that being said, United has its warts, too. Chief among them for this reviewer is the aforementioned bevy of co-writes. Again, songwriters writing songs for a band is an industry-wide practice and not a problem in and of itself. The hang-up for this reviewer lies in the fact that many of the songs have a been-there-done-that feel--as though bits and pieces of what has worked on previous albums were thrown together into a song generator, and out popped a new song. The album as a whole lacks the cohesiveness that fewer writers would afford it. This is certainly debatable, but even good songs like "Greatness Of Our God," "Symphony," and "This I Know" suffer from this issue of repackaging, sounding eerily like their hit song "He Reigns." This may not be a big deal for many, but for this longtime fan, it is hard to overlook. Secondly, the middle of the album is forgettable, with the Furler and Taylor penned "Worth Fighting For" making up the weakest track. Undoubtedly, "Rejoice" from the deluxe edition of the album would have been a stronger choice in its place. In addition, the best part of the aggressive "Love One Another" is Kevin Max, and even then he is nearly wasted, with very little to do. Lastly, and maybe the most nitpicky of criticisms is the fact that with an album title like United, their reach for unity didn't go any deeper than lyrical clichés like, "love your neighbor as yourself/treat your brother kind" ("Worth Fighting For"), and "love one another/sister and brother/don't hurt each other." ("Love One Another")

Though not a perfect album, all in all, the brand of Newsboys continues on, and with this United, and likely hit record on their hands, we are sure to hear more to come. This is by no means a bad thing, one only hopes that they dig a little deeper, and take the time to release something with a fresher, creative feel on subsequent albums. United is a strong release for the times, but with a little more gestation, and fewer cooks in the kitchen, hopefully, they can reach for greater heights, taking their listeners with them in the process. Until then, we have these well-crafted pop songs to sing along to, with "Greatness Of Our God," "Symphony," "This I Know," "Only The Son (Yeshua)," and "Set Me Ablaze" the best of the bunch.

With the announcement of last year's UNITED tour, it became abundantly clear that the iconic CCM band Newsboys was entering a new fourth era. In bringing back co-founder Peter Furler and staple Phil Joel, fans had hoped that this union would represent a quality shift in the band's current offerings. While the concert experience has undoubtedly been exciting, the inevitable album release, United, is decidedly less so. The first single (and track), "Greatness of our God," is a fun and likeable offering, albeit nothing incredible. Unfortunately, its 'bigness' mostly serves to oversell the rest of the album. "Love One Another" features dc Talk alum Kevin Max's unmistakable voice and is a quality offering. It was disappointing to see that one of United's best pieces, "Rejoice," is found only on the deluxe edition. "Worth Fighting For" and "Only the Son (Yeshua)" are also quality pieces.

Both Furler and Joel's work (solo projects and with the Newsboys) is nostalgic and of exceptional quality. This being the case, I truly wanted to love this album, given its exciting premise. Unfortunately, United carries a vibe of being overly manufactured and somewhat unnecessary. Nothing here is bad, but so long as the Newsboys continue to overly rely on "borrowing" songs from other artists and writers, their most whimsical, poignant, and catchy melodies and lyrics will remain in the rearview mirror. - Review date: 5/1/19, David Craft of Jesusfreakhideout.com

When word first dropped that singer Peter Furler and bassist Phil Joel were returning to the Newsboys fold for the United release, many a longtime fan wondered whether the resulting album would herald a return to the bands classic sound. Of course, the answer to that question depends, in large part, upon the definition any given listener attaches to the word, classic. Fans who took a shine (slight pun intended) to the spate of mostly worship-oriented albums that filled the better part of the Furler-led groups repertoire during the first decade of the current millennium will probably find United similarly to their liking. Those who prefer the quirky, light-hearted lyrics and ingratiatingly catchy combination of pop, rock and dance that vaulted efforts like Take Me to Your Leader and Love Liberty Disco to their rightfully lofty perch atop the 90s Christian pop charts are likely to find that sort of unique, idiosyncratic flair in frustratingly short supply this time around. Songs like Love One Another and the remixed version of The Greatness of Our God do come admirably close to recapturing the unique, infectiously offbeat vibe of yore. By and large, though, the all-too-generic new project, like virtually every other post-Y2K offering in the back catalog, winds up coming across as a lesser cousin to the bands distinctive, and far-superior, early works. - 5/10/19 Bert Gangl