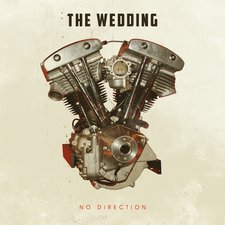 The Wedding
No Direction

The rock quartet, The Wedding, has been around for nearly ten years. Since their inception, they've switched lead vocalists and released all three of their full-length albums on three different labels including their newest endeavor, No Direction. Their first release on Tooth & Nail records comes five years after their last full-length project, Polarity. Although the band has filled the void with a couple of strong EPs, how does lead-singer Matthew Shelton hold up on a full twelve tracks?

Of the twelve tracks on the album, there are only ten and a half new songs. One of those exceptions, "Heartbreak In Melody" is a heavily guitar-driven, rock song from their 2010, independent EP, The Distance, and, although not my favorite tune from the EP, its presence helps balance the back end of the album. The album's closer, "Distance And Resolution" was the explosive introduction to the Distance EP, but, here, the band adds extra length close to the middle of the song. The transition from the old music to the new isn't seamless, but the ending marriage results in a satisfactory conclusion of a track that was too short in its original form.

Now, to the really new stuff. No Direction doesn't waste time establishing itself as a rock album first and foremost with the title track and its fast-paced beat and catchy refrain. "In The End" showcases a lot of loud guitars and raw energy that could have used some polish, but The Wedding nails the ideal sound in "Lesser Worth." The album slows down some after that, and listeners are exposed to songs with a little more pop. Both "The Raconteur" and "Hang On Love" (and later "Young And Dangerous") are more upbeat, and offer spotless, enjoyable refrains. The most bizarre song on the album is "Mors Tua Nos Vita" which opens with a haunting acoustic guitar before finishing in a rising rock display.

Lyrically, the album is a mix between cautions and anthems. The singer on "Lesser Worth" appears to vent his discontentment of the American obsession with wealth and comfort ("I find no comfort here") while alluding to an answer of greater importance. "Kill Any Excuse" discourages believers who want "All the glory of the martyr but none of the abuse all the glory of a good man/but at the lowest price" when we should instead be "counting up the cost/[considering] everything as loss"). Both "Raconteur" and "Young And Dangerous" fit the anthem bill while the latter rejects the notion that youth must remain on the sidelines until they are old enough to make a difference.

From the fourth song on, No Direction is oddly tracked and, at times, I was wondering where the album was going. It's not the most spiritually deep project you'll ever come across, and there are many moments where the audio portion of the release sounded like it could use some extra polish. However, I liked the album. Although it's quite a different record than Polarity (you won't find much in the way of a punk influence in No Direction), The Wedding has produced a solid album which will not only please their faithful fan base but also serve as a good introduction to new fans.

Despite being around for years now, The Wedding hardly ever seems to be dropping full-length albums. But the newly signed Tooth & Nail act known for their punk flair alternative tunes is bringing their creative sound to a record store near you with their third album, No Direction.

The first chunk of the album is exactly what one would expect to find when listening to an album from the four piece from Arkansas: fast-paced, chant filled, anger-laced alternative rock tunes, and each one comes out delightful. These boys can definitely play their instruments and holler positive anthems, making this part of the album replay worthy. Near the middle of the release is "The Wildest Ocean," which showcases a softer side and more depth with lyrics like "with all my transgressions, I need Someone who can wash it all away... Tell me it's more than being broken." The track is haunting and simply amazing.

Some of the songs aren't noteworthy, but they're not necessarily bad, either. "The Raconteur" and "Young and Dangerous" sound a little repetitive with a few too many "whoa's whoa's" for their own good, and "Hang On Love" doesn't seem to fit on this album and should have been omitted entirely. Overall, this is certainly worth picking up if you're into previous stuff from The Wedding or simply a fan of the rock or alternative genre. - Kevin Hoskins, 9/21/12