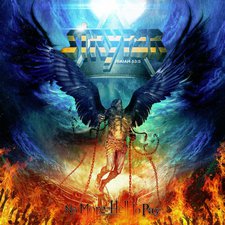 Stryper
No More Hell To Pay

Artistic transcendence is a funny thing; you can never really plan for it or predict when it's going to hit. For front man Michael Sweet and his cohorts in Stryper, the proverbial muse has blessed their labor with truly-inspired recordings at least twice in their three decades together as a unit. The first time, as any longtime follower of the quartet will be quick to tell you, came in the autumn of 1986 with the release of their pioneering third project, To Hell with the Devil, the lone platinum long-player in the group's extensive repertoire and the only one from any heavy metal outfit to earn a mention in CCM's 100 Greatest Albums in Christian Music book. The second instance, as improbable as it might seem, came over a quarter of a century later, via last year's Second Coming, a blistering set of remakes of the foursome's '80s material - and, more importantly, one that positively lit a fire under the band and rightfully caught the attention of many a fan who had all but dismissed Sweet & Co. after they went on extended hiatus at the turn of the '90s.

Like Second Coming before it, the new record's greatest asset, and one that has largely remained just outside the band's grasp since reconvening in 2003, is the way in which it manages to stay true to that intangible quantity which devotees now regard as the classic Stryper sound while still bringing something thoroughly contemporary to the table at the same time. Indeed, songs like "Saved by Love," "Te Amo" and the likewise top drawer closing number, "Renewed," are chock full of dualing lead guitar work, thundering percussion, lightning-fast solos and impossibly high-pitched vocal work that were nothing short of bread and butter for the group (and the majority of their spandex-loving peers) during the better part of Ronald Reagan's twin stints in the Oval Office. That said, the darker, minor-keyed tones and minimalist, yet supremely full-bodied, production aesthetic of the most recent release stations it firmly in the post-millennial era.

As much as anything else, the latest outing represents a shoring up of pre-existing shortfalls. Eye-catching and unique as it may have been, Stryper cover art has always sported a sort of amateurish quality about it. This time around, by comparison, Stan Decker's consummately-rendered image of a heavenward-looking angel exiting a fiery lake carrying broken chains (a clear nod to the THWTD cover) is an out-and-out masterwork. In the same way, the collective's ballads have long been a bone of contention amongst both the naysayers and faithful. Here, though, the lone concession to balladry, "The One," trades the sugar-sweet, almost cloying aesthetic of now-familiar chestnuts like "I Believe in You" and "Honestly" for a simmering, bluesy touch that slots it in far more comfortably next to Pay's more bracing material. Most noticeably though, tracks like "Sticks and Stones," the cover of the Doobies' "Jesus Is Just Alright" and the title cut augment the already-impressive instrumental and vocal pyrotechnics with an ingratiating funk and swagger that elevates these superb compositions to a lofty perch atop the better portion of the singles in the back catalog.

Despite its many assets, the album isn't quite a perfect proposition. A handful of the tracks forego hook and melody in favor of sheer speed and volume. Sweet's vocals are mixed (or perhaps delivered) in such a way as to render them semi-indecipherable at several points during the proceedings. And the group's characteristically uncomplicated, what-you-see-is-what-you-get lyrical approach will either delight or frustrate any given member of the listening audience depending on how enamored they happen to be with, say, the last three Daniel Amos records. These minor quibbles aside, even considering its weaker moments - which, in the grand scheme of things, are decidedly infrequent - the latest effort from the enduring SoCal four-piece is a hard-rocking tour de force. Indeed, it's hard to envision any true fan of the band, or the metal genre in general, not absolutely loving it. The most dedicated members of the Stryper camp have held out hope for a worthy successor to the landmark Devil release almost since they day it first hit the shelves. Here, some twenty five-plus years and seven albums later, it would appear that their patience has, at long last, finally been rewarded.

The reception of projects since Stryper's reunion have been mostly mixed, from the nu-metal leanings of Reborn to their more poppy Murder By Pride, and their latest two albums of song reinterpretations and covers. Until now, the foursome had not yet quite recaptured that spirit and insatiable appeal that made them so popular in the 80's. But with No More Hell To Pay, Stryper has finally given us that album the fans have been waiting since 1988 to hear. No More Hell To Pay features the presence of a maturity and grittiness that the band simply never had in the 80's, but their overall sound is classic to the core, even epic. Every song soars, but yet is unique from one another. Their lyrics are as God-centered and straightforward as ever, but are never trite or tiring to hear. And the musicianship, from Michael Sweet's vocals to Oz Fox's guitar work (especially on the numerous solos) to Robert Sweet's drumming, is the best I've heard from the band since their reunion. In a way, this album feels like a modern reimagining of To Hell With The Devil, from the cover art to the epic scope to the riffs and solos that scream songs like "To Hell With The Devil," "Free," or "The Way." Of course, what No More Hell To Pay lacks compared to its 1986 counterpart is any pop-metal like "Calling On You" or power ballads like "Honestly." This album strictly rocks from start to finish. "Marching Into Battle" is the biggest highlight of all with its militant beat, haunting gang vocals, and spiritually aggressive lyrics, but "Revelation," "Te Amo," and the title track all are highlights in their own right, and every song is simply excellent all around. No More Hell To Pay simply may be the best work of Stryper's illustrious career, To Hell With The Devil included. It is Classic Metal meeting a new era of rock in a spectacular collision. Fans of "Classic Stryper" and "New Stryper" alike will love the album, and I can see legions of new fans being won over by this epic masterpiece. - Mark Rice, 11/3/13