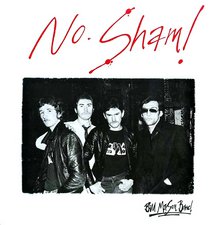 Many a would-be philosopher has claimed that success in the music world is often a mere matter of being in the right place at the right time. If this is indeed the case, then Bill Mason and the band that bore his namesake were all but destined for failure. Hitting the studio to record their debut album on the first day of June, 1979, Mason & Co. were touted as the first Christian punk band at a time when the top five acts on the Billboard Hot 100 were Donna Summer, Peaches & Herb, Sister Sledge, the Bee Gees and Blondie. A quick look at the Dove Award nominees for that year - which included Don Francisco, the Bill Gaither Trio and Debby Boone of "You Light Up My Life" fame - gives a pretty clear indication that the situation wasn't any more favorable on the Christian side of the fence.

Of course, when '70s punk music is mentioned, most folks immediately think of the chugging, impossibly fast three-chord thunder of pioneering punk artists like The Clash and the Ramones. In fairness, applying those points of comparison to Mason's band is certainly accurate to a degree. The final notes of cuts like "Out on the Streets," "Radio" and "I Got the Answers" are all distant memories long before the two-and-a-half-minute mark is ever reached. And ten seconds worth of "Stand Up and Be Counted" and the equally bracing kickoff track, "Billy and the Rota's," should convince even the least savvy of listeners that the group was hardly shy when it came to playing their songs really, really fast. By and large, though, the Sham! project finds the Manchester, England foursome crafting their tunes around the infectiously high-spirited combination of punk chutzpah and pop sensibility favored by pre-MTV era British artists like the Buzzcocks, Joe Jackson and Elvis Costello.

Perhaps sensing that, even in their native UK, the Christian market wasn't quite ready for a born-again version of The Jam, Mason branches out from his punk-leaning roots at several points on the release. The latter portions of the frenetic, reggae-tinged "I Don't Want You" point to the Police's "Don't Stand So Close to Me" a full year and a half before that now-ubiquitous single ever saw the light of day. Simon Hawthorne's nimble-fingered guitar solo at the end of "The Lost Years" is the sort of fret-based mastery that most surf rock guitarists would have given their eye teeth to have composed. And the period-authentic disco flourishes of "Mr. G." were almost surely delivered with the band members' tongues planted firmly in their cheeks.

A few of the songs, such as "Detectives" and "Get Inside," drag on in spots. Others could use a more substantial melodic structure. And even for an album recorded in the '70s, the production values are decidedly sparse, almost demo-like. Ironically enough, though, where this sort of no-frills approach would have been a liability for those in the pop or rock markets, among Mason's contemporaries, it was arguably something of an asset, given that the majority of punk-pop artists in the late '70s and early '80s prided themselves on their fiercely lo-fi aesthetic.

Here in 2012, the quartet's debut (and, lamentably, only) full-length effort sounds almost tame compared to the hardcore punk, speed metal and rap-rock that have arisen in the decades since its release. Placed alongside the largely homogenous material currently populating the Christian radio Top 40, though, this proverbial shot across the bow seems positively revolutionary. Mason and his cohorts should be held in high esteem for taking the road less travelled, and one can only hope that the band will finally come to their senses and reunite for good here in the post-millennial timeframe. No sham, indeed!