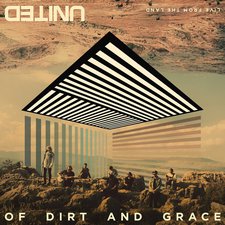 Hillsong UNITED
Of Dirt And GraceLive From The Land


Throughout the mid-2000's, worship music was often viewed under the banner of one major stereotype. When the genre was brought to mind, it was associated with a clean, straightforward musical structure and repetitive lyrical themes. This stereotype was enforced so much that worship music, unfortunately, became the lesser of the genres to many music fans. As a result, it really wasn't classified as music but the vehicle that brought listeners to their knees. The problem was that the music itself didn't seem to recognize this. It constantly tried (and in some cases is still trying) to present itself as a source of relevant music, the most prominent example being the genre's newfound near obsession with EDM.

Hillsong UNITED, however, took a major step towards the genre's true purpose with their 2013 record, Zion. The music was excellent, of course, but at its core, it was the backing track to the real reason the genre exists. Zion's follow-up, Empires, achieved a similar vision, although not as well done as its predecessor was. Now, arriving just over a year later, Of Dirt and Grace, a live remake of the entire Empires album, may be the best we've heard from the band yet.

Opening with "Here and Now (Madness)," it's evident that Of Dirt and Grace reaches for something beyond its fine musical components. The song is a slow build that, instead of choosing to draw attention to itself, creates an ethereal atmosphere that sets its sight above. In fact, this is practically how the whole album plays out. The instruments are played gently and graciously while the vocals (especially those of the most highlighted lead, Taya Smith) are delicate yet commanding. Even when it picks up its pace in "Street of Mercy" and "Rule," there's an underlying aesthetic that remains worshipful.

Adding to the intimacy is the album's visual component. Examples of the historical locations these songs were performed on include the Via Dolorosa, the Mount of Beatitudes, and the Sea of Galilee. It's an original concept that enhances the beauty of these songs even further.

Overall, Of Dirt and Grace is a magnificent achievement. Not only does it remind us of worship music's true purpose, it also offers a unique and beautiful concept. Any fan of Hillsong UNITED and live worship should fall head over heels for this, while those looking for a little more depth will still do well to check it out.