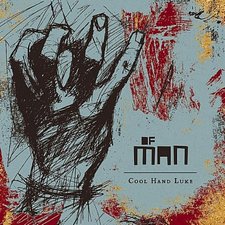 It has been a widely known fact that the follow-up to 2008's The Sleeping House would be the last Cool Hand Luke record. Since that time, the band has dwindled down to one lone member, spent some time touring, and recorded their eighth studio album, Of Man. The somber, piano-driven sound of this release will be familiar to CHL fans. Lyrically, this album focuses on Jesus' last days, but with a unique twist; the perspective often switches from Christ Himself to the people in His life. The ambitious nature of the album makes for a satisfying farewell to Cool Hand Luke's 13-year career.

Of Man begins with an instrumental, which is perhaps the heaviest of the twelve tracks, before smoothly transitioning into the painful, "Are You Coming?" Tragically beautiful lyrics tell the story of a man who loses his faith after his wife passes away. A genuine sense of this character's torment can be felt through the softly sung lyrics and unsteady music. The end of the second verse gives the listener more information about who the man is and how he plays into the story of Jesus, "Then a light came in the form of a man, I hit the floor and I lifted my hands, Then it told me the Lord will come soon, to eat the Passover in my extra room." The third track, "Goodbye For Now," is Jesus talking to the disciples. Mark Nicks does a wonderful job at keeping the conversation grounded in the album's timeline, never saying more than what Jesus actually revealed to the twelve at this point. The mood is captured perfectly with lovely piano playing and strings joining in during the chorus. "The Last Supper" retains the viewpoint of Christ and fast-forwards to the song's namesake. It starts off with a sound similar to that of the last two tracks, but changes pace a little over two minutes in. The first-person camera shifts down the table and sits behind Judas Iscariot in "The Silver."

The longest track on Of Man, clocking in at seven minutes and ten seconds, is "His Eyes." Dynamic music composition makes for constant changes as the character describes his witnessing of Jesus being beaten and crucified. As the song charges forward, the vocals show this witness becoming more and more distraught and desperate. Temperate vocals evolve into emotionally packed, forceful singing and eventually into screaming. Crowds chanting "Prophecy" and "Crucify" can be heard in the background in parts of the song. Like most of the album, it is quite difficult to listen to due to the graphic subject matter. Regardless, Nicks deserves applause for his recapturing of this horrific event. Luckily, a soft piano instrumental called, "The Burial" follows. This was a smart inclusion as it provides a relief from the emotional depth of the previous track.

"The Confusion of Simon Peter" describes the disciple reflecting on Jesus' promises and his attempt to make sense out of what just happened to the one who claimed to be the Savior, "Son of God, Son of Man, Deceiver or the Great I Am?, Whom have I in heaven but You?, What on earth am I to do?" The contemplative quality carries over to "I Remember," this time from Mary's eyes. This song is relatively light compared to the rest of this collection. The setting switches to the tomb site, with the guards giving their account of how a dead man went missing. "Not the End, Not the End" brings the story and the album to a close, "We lost Him then we had Him back, But only forty days, He lead us out to Bethany, And blessed us with His hands, We watched Him rise until we couldn't see him for the clouds."

Just like the visual interpretations of these events are hard to look at, this album is equally as hard to listen to. This dark tone may keep many listeners away and keep the play count low for most others. From a musical standpoint, the album almost plays as one long fifty-minute piece. Despite the music always complimenting the message, some may walk away desiring more diversity between the songs. Small, petty complaints aside, this send off is a memorable one for Cool Hand Luke. The story told here is one we have all heard a thousand times. Sadly, it can become so familiar to us that it ceases to move us in the way it should. Of Man successfully squeezes out every bit of emotion the story was intended to evoke in our hearts. Anyone who enjoys softer music and has a desire to hear a distinctively different telling of the Passion events will want to listen to this album, even if it is only once.

Cool Hand Luke caps their 13 year career off with a final release, Of Man. The album is not a disappointment, but it is a touch disappointing. Let me explain. The album is their most Christ-centered lyrically. According to Mark Nicks, "The album tells the story of Jesus' final days from the perspective of the people in His life." The music is absolutely beautiful and piano dominated. In fact the only track that takes on a rock approach at all is the album best, "His Eyes." Though the lyrical content is astounding and the music is brilliant, the album is tedious to listen to as a whole. Other than the peak of "His Eyes," which is the seventh track, the album remains at a constant slow pace driven by Nicks on the keys. Although Nicks had help from many friends, he played all of the main instruments including piano, drums, synthesizers, other percussions, and provided the vocals. Of Man was completely self-funded and recorded. Though it would have been nice to see Cool Hand Luke go out with a bigger bang, for some reason Of Man seems to be a fitting farewell. Mark Nicks is finally committing to what he says is a 10 year calling to the seminary as he and his wife Brandy are moving to Orlando, Florida to begin the next chapter of their lives. If you were looking for a rockin' finale you may just want to download "His Eyes" and move on, but if you are looking for an album full of substance, you are going to want to check out Of Man. Listeners beware If you don't typically listen to slower piano music, this may start to feel longer than the forty-nine and a half minute record that is. Good luck, Mark, and we pray that God is with you as you embark on this new journey in your life. - Michael Weaver, 5/2/11