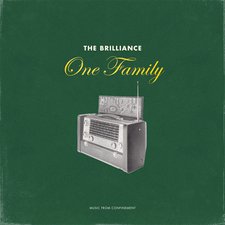 The Brilliance
One Family: Music from Confinement - EP


Even though quarantines and public shutdowns are largely negative for most businesses, one industry that could potentially thrive is art. 2020's pandemic has already led to a number of albums inspired by its passive chaos, but very few Christian releases have been the direct result of our current climate. The Brilliance are remedying that with their new EP: One Family - Music from Confinement, which also happens to be their third project release of the year. In a lot of ways, Suite No. 2: World Keeps Spinning was an antidotal precursor to the various tragedies we've seen this year, and Give Me Doubt was its supplement. Now, One Family addresses the general isolation that being alive in a time like this feels like while continuing in the meditative minimalism that David Gungor's collective is known for.

The benefit that comes from having made plenty of music beforehand is that a 13-minute EP can be effortlessly focused. This becomes obvious right away on "Telephone" with the swell of strings that gets abruptly cut off by Gungor's familiar nasally vocals atop a simple synth line and drum pad. This palette changes very little throughout the EP, helping to cement the central theme of experiential unity. Gungor explains this theme through the story of a woman who's lost someone beloved and underlines it with the refrain "We dream, we run, we fight, we fall/These are things that unite us all." "Dark Shadow" introduces an acoustic guitar and feels like an early Bon Iver track, keeping things just as minimal. Perhaps the most intriguing track of the EP follows, which is... "Telephone"... again. Compositionally, it is almost exactly the same song as the opener, however, this time the notes and chords are led by the vocals of Emme and accompanied by the constant ticking of a clock. Hearing the lyrics also adds to the feeling of deja vu - the story is almost identical with just a few disparate details and the manner in which they presented being different. The clock's ticking carries over into the closing title track, which repeats a simple phrase over an equally repetitive piano line as compositional flair slowly increases until it closes out the EP.

One Family is unabashedly small. This is true of runtime, yes, but it is just as minimal in message and mostly held together by flowing instrumental sections. It is a project that would be easy to skip over as it isn't much of an earworm and it isn't interested in provocative ideas. But perhaps the fact that it is so quiet is exactly why we should listen.