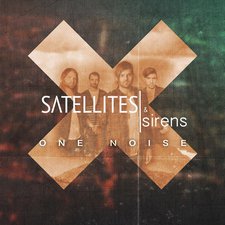 When a band has a faithful following, never count them out. Even after Satellites and Sirens parted ways with Word Records, they continued to record new material (2011's Frequency was the band's best yet) and keep their fans completely in the know with social media. Before long, Dream Records came knocking, and now on album number three, Satellites and Sirens keep their electronic pop on course with One Noise, their most accessible and heartfelt effort yet.

Satellites and Sirens frequently takes an electronic pop approach, and One Noise is no exception. Does One Noise up the ante, though? Well, this is where the album becomes less notable. Frequency was a great step in the right direction for the band because of its unabashedly alternative approach that nevertheless never compromised in its aim. After moving back onto a label, however, the next album looks to sand off any edginess that the band previously had, trading in harsh guitars and synths for calmer and atmospheric sounds that take few chances. In a similar career move to The Afters, the distinctive nature of the band gets a bit muted for this effort, leading to paint-by-number radio hits like "Teach Me How to Love," "We Are Yours," "Our God Is Able," "You Traded Heaven," and "United Kingdom." "Holy Are You God" just plain doesn't fit, either, as the obligatory slower worship ballad.

To be completely fair, Satellites and Sirens are keeping their base sound they've had from day one, and the band's identity hasn't completely fallen away. Geoff Hunker's clean vocals have been a mainstay of the band's sound, and they still sound great here, and the worshipful lyrics have stayed put. But it's hard to get around the fact that the risk is gone here. Even tracks like "Jump Start My Heart" and the title track, which seem like the most complete tracks here, opt on the formulaic side of the spectrum to ensure radio play. In an attempt to make a pop effort that appeals across the board, it merely dulled the eccentricities that made Satellites and Sirens special. Contemporaries like The Wrecking were able to make the transition successfully, garnering new audiences while maintaining their original crowd, and it's tough to see S&S lose some of their identity so quickly.

Dream Records was wise to sign this band to their label, as they clearly have the fortitude to push through the uncertainty of independence. It's just too bad, then, that One Noise is the least impressive effort of S&S's career. The band's character worked well to produce catchy material that still seemed true the band's DNA, but when trying to appeal to everyone, the uniqueness suffers. One Noise is all but a sell-out move, but hopefully future efforts on Dream will see the band return to form.