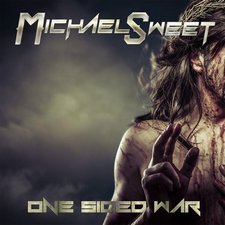 
The last time he took a jog around the proverbial solo-album oval, Michael Sweet seemed determined to prove that his tastes run far broader than the mostly-metal aesthetic that has long since become bread and butter for him and his band mates in Stryper. While 2014's I'm Not Your Suicide was hardly his strongest or most consistent effort, it nevertheless offered convincing evidence to both existing fans and the naysayers that Sweet's talents are, indeed, as diverse as they are impressive.

Listening to the first two, decidedly Stryperesque, cuts from his new solo record, one might be led to think that he's following the same template laid out by Suicide, which also began with a pair of tracks that sounded as if they could have been outtakes from any of Sweet's last few band-based outings. To be sure, like "Taking on the World Tonight," from Suicide, "Bizarre" kicks off the latest installment in the Sweet catalog in particularly invigorating fashion, thanks to its heavily-compressed guitars, chugging cadence and high beats-per-minute tally. The follow-on title song eases off the gas pedal a bit, but compensates for its comparatively slower pace with a tastier melody line and a funkier, more syncopated set of rhythms that render it the superior composition.

That said, where the remaining portion of the previous solo album found Sweet branching out into a host of non-metal domains, including British Invasion pop, contemporary country and even folk-rock (a la his surprisingly convincing cover of the 1972 Neil Young folk-rock chestnut, "Heart of Gold"), this time out he sticks, for the most part, to the hard-rocking textures that first brought him to prominence during the glory days of the early MTV era.

This approach, as it turns out, winds up being both an asset and a liability. "I Am" presents a towering, slightly-dissonant slice of hard rock that, as much as any song he's released in the last decade and a half, reveals just where Sweet's true niche lies. And the ingratiatingly catchy pop-rock textures of "One Way Up," which might best be described as a slightly slower, harder-edged cousin to Van Halen's "Finish What You Started," render it a similarly unqualified winner.

Its relative merits notwithstanding, though, too much of the record is filled with energetic, but ultimately undistinguished material that lacks the hook, melody and swagger that made the last pair of Stryper projects such convincing artistic statements. Adding to its musical homogeneity, a good portion of the album is filled with lyrics like those of "You Make Me Wanna" ("No one makes me feel the way you do/ No one makes my heart as strong and true/ I wanna live every night with you") which do few favors for those seeking something a bit more thematically substantial.

Of course, all such scrutiny is mostly academic for dyed-in-the-wool devotees, who likely purchased War the day it was released. And, in fairness, Sweet absolutely deserves credit for being one of the few artists from the '80s still convincingly practicing the classic metal idiom, which debatably places him head and shoulders above the lion's share of his hard-rocking contemporaries -- too many of whom have long since stopped writing material that equals, or betters, that of their heyday. Those who appreciated the diversity of Suicide and hoped it was a harbinger of things to come might be a bit disappointed at War's less eclectic approach. Those who were off-put by the all-over-the-map nature of Suicide, on the other hand, will likely find One Sided War yet one more welcome reminder of Sweet's core musical strengths.