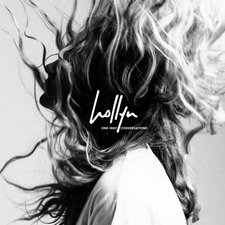 
In 2015, Ohio native Hollyn released a quirky introduction EP that paved the road for a promising debut, an album that I hoped would further explore her creative vision. An enthusiastic attitude, paired with undeniably catchy hooks and a strong voice, placed Hollyn firmly in my artists to watch list, so does One-Way Conversations fulfill expectations? Not entirely.

To form a strong and cohesive album, there are two main factors that need to be present: an original or inspired creative vision and a logical execution. While the former may make an album musically interesting, it's the execution that pulls it together and keeps it from going in too many directions at once. Hollyn's self-titled EP showcased both factors quite effectively, but One-Way Conversations seems so focused on its style that it forgets to execute it in a cohesive manner.

Musically, the album relies on a mostly subdued urban, hip/hop flair (think Selena Gomez or Justin Bieber). Opener "Can't Live Without You" is an honest confession of loneliness and need when either God or a loved one isn't present. It's a gripping tune with a solid hook and a west-coast inspired backdrop. "Obvious?" follows in a similar musical vein as Hollyn tries to help a friend open up about destructive habits, "I just wanna walk with ya, but I always wanna give you your space, I know where you're standin' I can't help you if you don't let your walls fall down. Let your walls fall down."

"Love With Your Life," the album's debut single, finds itself sandwiched between the aforementioned tracks. It's musically akin to something one would find on a Katy Perry record, which stands in stark contrast to the rest of One-Way Conversations. Furthermore, it's a very generic tune that has more akin to filler than a lead single. The album is hurt even more by the head-scratching inclusion of Steven Malcolm's own track, "Party In the Hills." Although Hollyn delivers a serviceable hook, this song feels completely alien to the rest of the record.

"Waiting For" and "Girl" close the album in a minimalistic fashion. The former sings about finally finding the partner God has in store, while the latter contains some surprisingly introductory lyrics in the chorus. "Come on let us get to know ya / We can hardly wait to know ya / What you got to say / Walk us down your lane....Give us just a little bit about you Hollyn." Considering this song is an autobiography in some respects, the lyrical choice can be justified, but it could have been a lot more profound than it is. Simply having Hollyn describe her life in her own way without the unnecessary voices from outside asking who she is would have made more of an impact.

In the end, One-Way Conversations isn't so much an expansion of her previous sound than it is a reinvention. Bogged down by some confusing directions and a handful of underdeveloped songs keep this from being the debut Hollyn deserves. Placing more focus on balancing creativity and execution would result in a much stronger record. If you're looking for a substitution for the many secular artists in this style, however, One-Way Conversations is well worth your time.

With the meteoric rise of Lauren Daigle, it's clear that the CCM industry is starving for fresh female talent. Hollyn's full-length debut, One-Way Conversations, offers an accessible pop sound, strong vocals, and a slight edginess that will undoubtedly find the CCM world (especially girls ages 12 - 24) embracing her with open arms. There are a couple odd choices about this album (namely the black sheep "Party In The Hills" and the Capital Kings remix of "Love With Your Life"), but overall, this is a promising start that is worthy of many spins. - 2/8/17, Christopher Smith