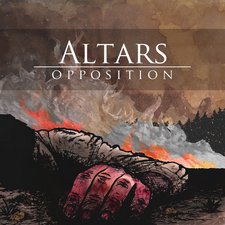 Colorado natives Altars hasn't been around especially long, but they have made good use of the time they have been together. Formed just over a year ago, the band has spent a good chunk of their time recording material, be it demos or the recording we're here to talk about. They demoed in mid-2010 and toured off of the material they had tracked. A few months later, they found themselves back in the studio, this time with Josh Schroeder (A Plea for Purging, For Today, and others) overseeing the work. The resulting project is a six-track EP entitled Opposition, and given the band's limited lifespan, we'll call this EP the beginning of their journey, because that is exactly how it feels throughout.

Comparisons to August Burns Red are obvious, and A Plea for Purging isn't too much of a stretch, either. Mostly, it sounds like the kind of hardcore you might hear on a Friday night at your favorite venue downtown - the band you said "Hey, those guys are pretty good. Too bad they'll probably never get signed" about. It's nothing groundbreaking, and I can't really come up with anything that especially differentiates it from others in their genre, but it's fun, engaging, and heavy. Some breakdowns come off as a little dry, or as if they weren't earned, but they're there anyway. On the whole, though, it's good hardcore, interspersed with some obvious, but not glaring areas for growth.

The screams are a little like those of ABR, but the screams found here almost sound a little fuller, and the lead vocalist's yells are just as strong as his screams and are mixed in enough to keep things sounding fresh.

Altars paints a portrait between good and evil, and the battle for the soul. The brutal licks, deep screams, and triumphant yells act as a call-to-arms against the opposition humanity faces on a day-to-day basis. The lyrics here compliment the music well and keep the listener engaged. The battle cries almost act as cadences as an army is led into battle; it's a lot of fun to listen to.

Sure, they're a very young band, but it's really a testament to the integrity and talent of Altars that Opposition is as solid as it is. The times you think "Well, they're young," it's with optimism, and a hopeful looking to the future. It's short and sweet, with a lot more pros than cons. Altars isn't necessarily the freshest sound to hit the streets lately, but I can't stop listening to it, and I guess that's all that matters.