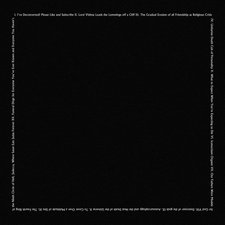 Showbread
Our Fathers Were Models For God


Showbread is not a band. But if they want to release new music that serves as a companion piece for the lead singer's new book which contains a secret website and password that you need in order to access the music, who's gonna stop them? Nobody, that's who. And so that's what they did - a whole album's worth, even! Our Fathers Were Models For God is an album fans never thought would happen from a proudly showdead entity, but its sudden appearance is cause for said fans to celebrate, as it's everything we could've wanted and more.

First things first: this album is designed to complement Josh Porter's new book, Death To Deconstruction: Reclaiming Faithfulness as an Act of Rebellion. Admittedly, the album is wholly enjoyable on its own, without even having to read the book. However, I do recommend reading the book, as it gives a lot more context to the album, which, to the casual observer, could appear cold and uncaring toward those struggling with the Christian faith. I won't spend much time on the literary portion, but long story short, Porter talks about his own struggles with Christianity, and pulls no punches when confronting those who leave the faith without even really trying to get answers, as well as dealing with our society's habits of making a spectacle of deconstruction for the sake of societal acceptance. The opening track, "I've Deconverted! Please Like and Subscribe," wastes no time getting down to business: "It's a shame to tear it all down / all of my Sunday school lessons about Moses and Noah, but... / I don't want them to think I'm sexist or racist, homophobic or stupid / so I have to go." "Lord Vishnu Leads the Lemmings Off A Cliff" follows up on this: "It used to be that quitting made even suckers feel like chumps / but you rebrand it like it's bravery and get these dummies lining up / to suckle at their own teats when the self is all in all / and 'do what thou wilt' shall be the whole of your God-forsaken law." As in the book, a lot of time is spent digging into the idea of man making ourselves into our own gods ("Destroyer of the gods," "Autosarcophagy..."), conforming to the world's standards as an act of non-conformity ("The Fourth Ring of the Ninth Circle of Hell..."), and - very briefly - our decision to return to Christ or not after falling away ("Some of us fall, then we crawl / and some of us come back / with everything breaking down / the light shines through the cracks / and we hear His voice" from "To Cover Over A Multitude of Sins"). And of course, per the Showbread norm, there's a little bit of lyricism that pushes the envelope, if even minorly. "Iconoclasm Orgasm" is a song title that will turn some heads, as will its cold-water-in-the-face closing lyrics: "I'm fanning out to hiss at people who say things like this / they don't bow to corporate groupthink, they don't chug the corporate p*ss." It's gross imagery, but it conveys exactly how little Porter values that mindset. (They also use "p*ss" in the closing track, but in the phrase "p*ss and moan"). The album is chock-full of biting wit and a boldness to stand for the truth of Christ in the face of a deconstructing world. If you snag a copy, you'd do well to read through the lyrics that come with the download, as they go much deeper than I can get into here.

Showbread faithfuls who haven't listened prior to reading this will likely be asking (verbatim, no doubt), "Well...what does it sound like? Is it unadulterated screamo-ish punk rock like Nihilism? Is it a quieter album like Who Can Know It? Or is it closer to the last Showbread-adjacent release from The Bell Jar?" It's a valid question, as you never know what to expect from Porter and company. The line-up for this album features both Josh and Patrick Porter, the mainstays of the project, as well as The Bell Jar's Whitney DePaoli and longtime Showbread member Mike Jensen. Josh and Whitney both share vocal duties, with some songs only featuring one of them, while others are more of a duet. Fans of I Infest, Therefore I Am will be well-accustomed to Whitney's wonderful vocals, as she once again brings a unique charm to the songs. Josh ends up being a bit more surprising, though. For starters, he utilizes his lower register a lot more, singing in a deeper tone that is likely very David Bowie-inspired. He also monologues for the entirety of the brilliant "The Fourth Ring of the Ninth Circle of Hell..." (which is all a word-for-word excerpt from Death To Deconstruction), and then pulls out some incredible death metal-ish growls in the title track. Just when you think you've heard everything from these guys, they find new ways to surprise.

It's interesting to see the liner notes list all four members as contributing synth, but then again, it is a synth-heavy album. Songs like "Unitarian Death Cult of Personality" and "Destroyer of the gods" are absolutely drenched in synthetic music - the latter even bears a striking resemblance to the Nine Inch Nails song "Closer." However, "I've Deconverted! Please Like and Subscribe" opens with more traditional instrumentation, including electric guitar, piano, and even an acoustic guitar. "Lord Vishnu Leads the Lemmings Off A Cliff" follows with some loud, tasty guitar riffs, and "To Cover Over A Multitude of Sins" features an excellent, bass-driven groove and an insanely catchy hook (which doesn't even have any lyrics - it's just Whitney vocalizing with an interesting effect on her vocals, but I love it). "Our Fathers Were Models For God" is one of the highlights, as it starts with some fast-paced, distorted punk rock, drops to a mid-tempo alternative piece in the middle, and then calls it a day with the aforementioned death metal screams and more punk rock. Our Fathers Were Models For God is a truly wild ride that always defies the listener's expectations.

This year has had its fair share of surprises (both good and bad) when it comes to new music. But a new Showbread album is the biggest and best one, considering the band died in 2016 (nevermind that they played at Furnace Fest in 2021). Our Fathers Were Models For God is an exceptional album that keeps the listener guessing, sounds fantastic, and isn't afraid to hurt anyone's feelings when it has to. It's bold, dynamic, and excellent, and I hope you can get hold of a copy if you so desire one.

(A quick note: I was asked by Josh Porter to not post the download link, but instead to encourage any interested parties to check out the book, which has the website listed in the Thank You section)