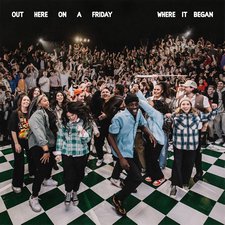 
In the late 1990s, Hillsong's Darlene Zschech recommended that the megachurch's youth ministry record an album of their own. Members had already been writing songs, and in 1999, the group currently known as Hillsong United would record and release their first full-length album, Everyday. While not leagues away from what the church's elder songwriters had crafted in the past decade, the album featured certain elements that made it notably different. There was "Jesus I Long," a song with nasally vocals and verses that teeter into third-wave ska, and "Heaven," a New-Age-sounding ballad with a programmed downtempo beat. Even the quasi-upbeat title track, written by a teenage Joel Houston, bore an interesting point of distinction: there weren't vocal harmonies with every line, as was typical for Hillsong tracks at that point. Compared to By Your Side, an album released by Hillsong proper four months earlier, Everyday felt like the product of a typical rock band.

While Zschech's "Shout to the Lord" would come to define a whole generation of CCM after its 1994 release, Hillsong United would be the most influential worship band of the 2000s. Their first masterwork was United We Stand, a better-mixed, better-sequenced, and better-sounding album than anything they'd released up to that point. It felt like the band had taken the advice of Hillsong worship pastor Reuben Morgan about songwriting: "When listening to other people's material, Christian or secular, analyze the grooves and harmonies and work out why the songs are so popular and memorable." Songs like "From God Above" and "Revolution" were adjacent to a slew of new post-punk bands like Bloc Party. Electric guitar parts, in their tremolo picking and reverb and delay, recalled U2's The Joshua Tree, but also post-rock bands like Explosions in the Sky, who reached peak popularity around then by soundtracking Friday Night Lights. It was Hillsong's first album to feature New Zealander Brooke Fraser, a folk-pop songwriter whose 2003 debut album handily went multi-platinum in her home country.

With rock music no longer capturing the contemporary zeitgeist in the early 2010s, Hillsong's newest iteration of a youth ministry worship band, Hillsong Young & Free, would have to operate differently. Their 2013 debut single, "Alive," has chintzy disco guitars and technicolor synths, and the follow-up, "Wake," is a stadium-ready EDM light show as a song. Compared to how EDM was evolving in secular music at the time, borrowing from Southern rap and sounding more abrasive (think: Bauuer's "Harlem Shake" and TNGHT's "Higher Ground"), Young & Free positioned itself like an aggressively chipper, optimistic alternative. The years since have seen the group's sound continually develop: "Just Jesus" sounds like Justin Bieber's "Sorry," and a recent Spanglish remix of "Indescribable" -- which has an AutoTune-drenched verse from Mexican American rapper WHATUPRG -- feels aligned with the crossover Latin pop and rap of the past few years. Hillsong never sounded more attuned to trends.

Cynics can decry such modish maneuvers, but there's a unique, Hillsong-ian verve to all the music the church releases. Young & Free's new EP, Out Here on a Friday Where It Began, showcases their particularities across seven songs and varying sonics. Opener and lead single "Phenomena (DA DA)" begins with a verse whose vocal melody has the sly, emotive lilts of Paramore's Hayley Williams -- just in time for pop punk's resurgence. But more than the muted production of Olivia Rodrigo or Machine Gun Kelly, its pre-chorus switches to Hillsong's tried-and-true formula: dignified confessions of God's transformative gift of life atop synth pads, glistening guitar melodies, and a slow-moving drum roll. The chorus is one of the most illuminating signposts of Young & Free's approach: it's a simple passage characterized by a slew of "da da da" chanting. More than a decade ago, Hillsong United would lead congregations to massive group chants, but it always had the bombast of Arcade Fire's "Wake Up." Here, the feeling is smaller scale, more welcoming, communal.

This "humanness" reaches surprising heights with the one non-song here: "Selah - Josh." Unlike any other recorded track in Hillsong's history, it features a barrage of filler words. That's part of the appeal, though: over indistinct audience chatter, Joshua Kpozehouen stumbles through an explanation of the following song -- "um"s aplenty -- and there's a down-home feel to the interlude, like a friend imparting words of wisdom unrehearsed. When Kpozehouen leads the piano ballad "Pride of a Father," it doesn't matter that it's overlong; its chorus quietly soars, suffused with a believable conviction of God's mercy.

Just as comforting is "House of the Lord," which plainly details Sunday morning rituals: "I spin my records on a Sunday / Before I get myself to church / I put on my best fit / Your song got me dancing." Its happy-go-lucky aura is magnetic and corny, in a charming way, which is crucial for a worship song that features a rap verse. The biggest hurdle with any worship group aiming to incorporate rap is contending with its constant evolution; rap verses in a praise song necessitate clarity for even the rap-averse, and maybe need to be something one can rap along with, so they often sound stuck in the past. Make a song exude a childlike charm, brought on here by sparse gospel synths and a joyous Sunday School-like simplicity, and it sounds more digestible, nostalgic even.

While "Freedom is Coming" has a welcome Black American gospel influence, "Never Fail" and "Song For His Presence" follow more typical Hillsong trajectories: an individual singer or singing-style across five-plus-minute runtimes, slow-moving uplift defined by cascading drums, and a mix that favors a thick and enveloping wall of sound. Promises of God's hope and love abound, and while the music and lyrics are banal, they get the job done. Nothing on Out Here on a Friday Where It Began feels destined for "iconic worship song status," but in 30 minutes, it's the most succinct showcase of Hillsong's decades-long modus operandi: adeptly wield a wide range of genres to spread God's word, from generation to generation.