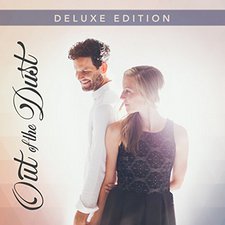 
Husband-wife duos have a significant advantage when creating music: they've lived stories through their marriages that perfectly manifest themselves through song. As a result, they've always been a mainstay in this industry filled with relationship-centric lyricism, and in the last several years, a new slew of names like The Gray Havens, Jenny & Tyler, and Love & the Outcome have all stepped out with landmark releases that prove this axiom true. And in this same vein now comes Out of the Dust, who brought forth their full-length self-titled debut last March to introduce themselves to the CCM market. Paired with production talent from Joe Causey (Colony House, Jenny & Tyler) and Kyle Cummings (Water Within, Vacation Manor), it's a debut that's polished in all the right ways.

Chris and Stephanie Teague's story isn't one most couples would envy. After marrying, divorcing, rediscovering Jesus, reconciling, and remarrying, the Teagues have plenty of real emotion and pain from which to write these songs, and it definitely gives the album's lyrical pathos more credibility. Though perhaps not as poetic as the pennings from The Gray Havens or Chris & Gileah, Out of the Dust's more direct songwriting is still pretty strong. While a good chunk of this album emphasizes the couple's redemptive story ("All That I'm Made For," "How to Love," "Make Us Whole"), the album's overall themes of trusting in and leaning on God through storms keep the album entirely applicable for any listener's struggles. Stephanie's voice has a similar feel to JJ Heller's (and tracks like "Lead Me Through" could easily be mistaken for her handiwork), and she takes the lead duties more often than Chris, though Chris mixes his voice with his wife's naturally and makes it sound effortless.

Out of the Dust's musical environment has an acoustic framework, though not without some production that polishes everything up one more notch. There's a good balance of energetic and quieter moments throughout; the radio single opener "All That I'm Made For" has a quick step in the chorus that remind the listener of pleasant shades of Golden Youth right out of the gate, while "Your Will," "Safe to Shore," and "Slow Down" are some of the album's finer cuts, where the duo simply sings the songs and lets the music carry the moments along as they should. "I'll Never Hide" ends the album as an acoustic number seemingly done in one take, and it concludes everything with the marital resolve rooted in the lessons the Teagues have uniquely learned as a couple ("The night was dark and hopes were few / Our hearts held captive in solitude / But our redemption skies are brightest blue / From the dust he made us new").

Many albums of this type often get muddled with same-sounding ballads that run together, and though Out of the Dust vary the tracklisting's tempo to keep the album interesting, it's not always seamless. While the track itself starts off well, "You Pursue" has an rougher chorus and bridge supported by a dirty guitar sound that doesn't quite match the verses' elegance Similarly, "Radicals" is a strangely fast and upbeat song that doesn't necessarily fit the rest of the album's solemnity (though the chorus's "oh oh"s are strangely infectious). "How Deep the Father's Love For Us" is an oft-covered hymn, and while the Teague's rendition doesn't break much new ground, the electric guitar and keys create a nice modern rendition here, even if it's perhaps the least remarkable track on the record. Most of these wrinkles get ironed out in second albums, however, giving much optimism for the couple's next outing.

The deluxe edition of the album includes acoustic versions of five tracks, which are more indicative of how Out of the Dust perform the tracks in a living room setting. These prove that the Teagues really do sound as good as their recorded selves with Chris and Stephanie's harmonies in full form. The faster track "All That I'm Made For" loses a little power without the kick drum keeping everything together, though "Your Will" avoids this issue with a bass beat loop that's just subtle enough to serve its purpose. "You Pursue," "Make Us Whole," and "How Deep the Father's Love For Us" all come with spoken word introductions from Stephanie and Chris that, while interesting for fans and rightly reflect the live experience, do detract from the songs replayability (or inclusion in shuffled playlists). Overall, these bonus acoustic cuts are welcome additions for a deluxe edition, and especially as keepsakes for those who've previously enjoyed the duo's live performance.

Husband-wife musical duos are nothing new, but the Teagues are well on their way to carving out their own niche in the genre. Their second album might present an interesting challenge to the Teagues as they broaden their songwriting approach, but by majoring on earnest songwriting and not trying to do too much, Out of the Dust is reserved in the best way possible, leaving plenty of room to explore creatively in the future. Until then, Out of the Dust proves to be an endearing new duo with a solid debut.

Saccharine. Twee. These are my greatest fears when trying out the work of another husband-wife duo. But that's not what you get with Out of the Dust, and when you listen to the acoustic tracks that close out this deluxe edition of the band's self-titled debut, you'll find out why this group might be more serious than most: Chris and Stephanie Teague have been divorced and remarried. The music they write flows directly from the redemptive work of Christ they've experienced individually and as a couple. During the short introductions that Chris and Stephanie add to the front of the acoustic tracks, listeners get to hear bits of this incredible story of restoration, meanwhile, these rough, unedited acoustic performances sound like what you'll get if you catch Out of the Dust on the House Show tour they'll be on for the rest of summer '17. That excludes one bonus track, "Your Will," which is a more fully produced reworking of the album's best song -- a beautiful and surprisingly experimental number about following God's will even when His "answers seem like silence." Elsewhere, "Lead Me Through" and "You Pursue" display how much musical talent exists here, creating consistently lush songs that never seem calculated or formulaic in how Chris and Stephanie share vocal duties. Even the album's weakest track, "Radicals," is a mostly-successful stab at radio pop. A touch of twee and saccharine does arrive on the album's proper closer, the ukulele-led "I'll Never Hide," but at this point, it's earned. The love of God is evident everywhere on Out of the Dust, such that, on "Make Us Whole," when Stephanie sings, "Nothing is wasted / This is our hope / You use brokenness to make us whole," you'll believe it and want to experience what the Teagues have. - 6/27/17, Chase Tremaine of Jesusfreakhideout.com