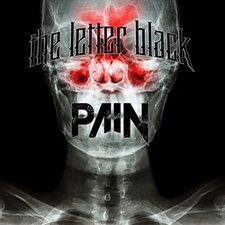 
Female-fronted rock band The Letter Black has been around since their stellar debut album, Stand, back when they were called Breaking the Silence. After changing to "The Letter Black," they released two more studio alums, Hanging on by a Thread and Rebuild. As they went on, they focused on a more metal sound... and got worse. They then strayed from Tooth and Nail Records and went to EMP. Under EMP, they released their fourth full-length studio album, Pain.

Pain starts out with the strange track, "Fear." The Letter Black continues to show weak lyrics throughout the rest of the record. "Fear" starts out with some seemingly cliche lyrics ("do you know what the most frightening thing in the world is? / it's fear"). After "Fear," "The Last Day That I Cared" comes in. This track uses too many accidentals and almost enirely takes away the enjoyment.

"Pain" and "Rock's Not Dead" are two rushed metal songs that don't add anything to the album (although people who like something completely new and different will like "Pain"). You may think, by this point, there is really nothing to save this album. However, the next song, "Kill the Devil" saves it from being a half-star album. The most surprising song is "I Am." It actually contains some fairly creatiive and clever lyrics, which is a nice change from the rest of the album.

So, why did I rate this only one star if two songs were pretty good? Well, "Kill the Devil," although it is a highlight on this album, would just be filler for, let's say, a Fireflight album. And "I Am" is not very good on the musical side. So, in conclusion, if you are a fan of excessive screaming and strange metal music, this is for you, but if not, I suggest you don't even sample it.