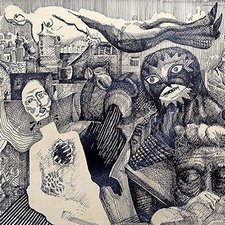 
I admit that, going into this album, I was not a big fan of mewithoutYou's unique music style. Some of the spoken/sung vocals and extremely complex lyrics seemed strange and slightly off-putting at first. But earlier this year, I decided to give their album Brother, Sister a listen, and their signature sound slowly grew on me. So I went into Pale Horses with a better understanding and appreciation of the band's artistic and poetic approach. All that said, Pale Horses is very impressive, though maybe not for everyone.

After the slightly uninteresting intro/title track, the album sets the tone with "Watermelon Ascot," a somewhat aggressive and almost hard rock number that serves as an in-your-face, thoughtful opener, and my personal favorite on Pale Horses. The album then transitions to the more somber and reserved "D Minor," with poignant lyrics dealing with failed relationships: "From the frying pan of a celibate man, to the fires of the premature/Who could ask for nothing more?" "Mexican War Streets" is another highlight that starts off slow with clean guitar and soothing vocals, but builds into more intensity toward the end as the lyrics get more spiritual: "I'd like to meet Whoever said the words we print in red". Following that is "Red Cow," a musical roller coaster that expertly transitions from softer guitars, vocals, and driving drums in the verses to distorted riffs and loud yelling vocals in the "choruses" that feel like it imitates the ups and downs of life. The midpoint of the album then brings us to the intermission track, "Dorothy," which is lyrically strange and awkward.

The second half of the album begins with "Blue Hen," an excellent, groovy, and melodic indie rock song that speaks about victory over death: "Death where is thy sting? You ought to put more thought into what you bravely sing/Aft-mast ships of straw-short bricks/You'll soon see exactly where my victory is." "Lilac Queen" is a solid song, but probably one of the weakest on the album due to its somewhat incoherent musical styles and overly cryptic lyrics. The acoustic guitar driven "Magic Lantern Days" is a nice change of pace, if not a bit repetitive vocally. Drawing us closer to the end of the album is "Birnam Wood," a contemplative tune with upbeat drums, a catchy guitar riff, and deep lyrics about questioning God's plan: "Steady is a knife held sure by faith/Are you a God? And shall Your grace grow weary of Your saints?" Bringing the album to a close is "Rainbow Signs," a unique, musically rich, but slightly overlong piece with poetic and apocalyptic lyrics (in English and Aramaic) that possibly reference the end of the world: "The sky, I'd been told, would roll up like a scroll/As the mountains and islands move from their place."

In conclusion, I think this is a fantastic album, but don't expect the most polished Christian album this time around. "D Minor" contains the word "b*stard" in negative context, and "Rainbow Signs" possibly uses a muted "F" word, but it's a bit unclear. Also, a weakness of this album is that it suffers from being too poetic lyrically at times, even to the point of being downright confusing occasionally. But, musically, it is consistently impressive, intricate, and even beautiful. Pale Horses is a wonderful addition to any mewithoutYou fan's library, as well as any fan of thought provoking music if you're willing to take the time to dig into it to find the gems.