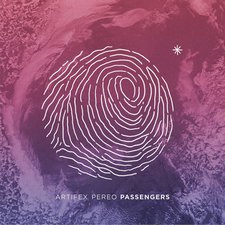 
Artifex Pereo landed on the scene with Tooth & Nail in pretty big fashion with 2014's Time In Place. The group released one of the best Tooth & Nail debut albums in quite some time and helped to strengthen the label's current roster. Their newest release, Passengers, picks up where there debut ended with no major stylistic changes. Instead of trying to reinvent the wheel, AP just continues writing solid material in the same vein.

"Re-Entry" is a short instrumental track to get you ready to embark on what's to come with the rest of Passengers, but leads nicely into the first real song, "First, Do Not Harm." While it's a good enough start, the album improves with "Paper Ruled All." The guitars in the opening section remind me of some old school Emery, as did several guitar parts on Time In Place. The yelling is also strategically placed and shouldn't offend the ears of listeners who typically don't like that vocal style. Although the yelling is pretty minimal overall, that fact remains true throughout the entirety of the record. While numbers like "Age of Loneliness" and "Enterprise of Empire" are more rocking tracks by nature, AP still manages to mix things up and keep some of the more unpredictable moments inserted into the music. One of the better examples of this is from the lead single, "Soft Weapons." The band goes for some more unique instrumentation with the notes for the verse, but when you think you're getting into the swing of the rhythm of the song, the chorus goes super airy and open. This works just the opposite as the drums and guitar get a little more intense for the bridge, making the music have three distinctly different sounds that work perfectly together within one song. There is a little less use of the piano on Passengers, however. In fact, "As History Would Have It" is the only track that features the instrument prominently throughout. While the softest song is second to last, you may think it's actually the final track that's the softest when it begins. You can feel the mood shifting gears at the 1:32 mark of "Static Color" as a much harder rock section begins. The song itself basically ends 3:15 in, but meanders a full minute and a half longer with mild instrumentation coupled with other ambient sounds and effects to end the album.

Artifex Pereo have proven themselves to be a force on the Tooth & Nail roster. While they are a fairly new band, in the grand scheme of things, they just "get it." They know what their sound is and they know how to execute it in excellent fashion. They're just familiar enough to really be enjoyed without constantly thinking, "They sound just like so-in-so," and they are experimental enough to enjoy some of the uniqueness without getting completely lost in the "experiment." "Paper Ruled All," "Soft Weapons," "Age of Lonliness," Enterprise of Empire" and "As History Would Have It" are all excellent examples of what AP has to offer their listeners. This was one of my most anticipated albums of 2016 and Artifex Pereo did not disappoint. It's not terribly different sounding than their debut, though they allow the songs to breathe a little more on Passengers, but it's really an album you can't go wrong with if you enjoy rock music.

Artifex Pereo really impressed me when they debuted on Tooth & Nail, as they called upon the label's superstar past for their craft, but came out as their own band rather than just a shadow of the past. Passengers is their much-anticipated follow up, and Artifex Pereo has only gotten better. In some ways, Passengers is a softer effort, with very subtle hints of jazz and a lot more alternative infusion, such as in "As History Would Have It." But they weren't afraid to bring out their heavy side, as "Paper Ruled All" and "Enterprise of Empire" features loud and impressive screaming, and "As We Look On" utilizes heavy rock music that, at times, rivals the best that metalcore has to offer these days. If anyone was wondering if Artifex Pereo's debut was merely a fluke of greatness, I'd like to put that notion out to pasture. Passengers is among the best alternative rock thatn 2016 has given us thus far. - 9/17/16, Scott Fryberger of Jesusfreakhideout.com

With many new rock bands rising and falling in recent years, having a second album on a major label is a significant achievement for Artifex Pereo. Their debut album, Time In Place, though not exemplary, was a welcome surprise in 2014, and now they are back with the follow-up Passengers. Taking a similar creative approach to making emo-tinged alternative rock, Passengers is heavy on song structure experimentation and cryptic lyrics. Because it is all over the place musically and thematically, it makes for a really intriguing listen, but like its predecessor, it can be too busy and lacking in cohesion, making it lose points for accessibility and memorability. Overall though, it's another solid effort from a promising rock band. - 9/7/16, Christopher Smith of Jesusfreakhideout.com