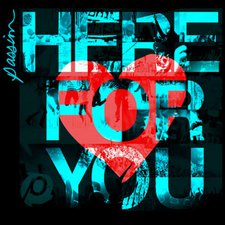 Passion: Here For You
(Various Artists)

Since 1997, the annual Passion conference has been joining young adults together in worship and prayer as one body. The conference has always featured an array of modern worship artists at the helm, leading everyone into the worship of our Father. They've also recorded the worship sets in order to release a live worship album. Each year, the latest Passion worship album ends up being one of the biggest CCM releases of that year. The 2011 release is titled Here For You and features most of the same artists as usual, with some additions as well.

Previous Passion albums have maintained a good mixture of the worship artists involved. Usually, the albums aren't overrun by one particular artist, but instead showcase nearly even amounts of songs from Chris Tomlin, David Crowder*Band and Matt Redman, with a few other artists making a couple appearances here and there, such as Christy Nockels, Charlie Hall and others. Here For You does mix it up pretty well, but of the twelve songs, six of them are done by Chris Tomlin, who doesn't do much in the way of bringing creativity or artistry to worship music. There are some moments of good musicianship and creativity, though. David Crowder*Band makes two appearances. He performs a song called "Sometimes" near the end of the album, to the pleasure of my ears. But the highlight of the two (and the entire album, for that matter) is when Crowder*Band performs "Shadows" from their beautiful 2009 album, Church Music. In the bridge, we get a surprise appearance from Reach Records resident rapper Lecrae. While DC*B keeps the upbeat music going, Lecrae throws some of his signature raps into the mix, making it an unusual pairing, but a solid one. Lecrae also makes an appearance in one of the three tracks included only in the deluxe edition; it's the last track, "Our God," and he appears with Tomlin. "Our God" is a rather boring track until Lecrae comes in, then it gets taken up a few notches. The rest of the songs that appear probably made for some great worship for those in attendance, but musically, offer very little, thus leaving very little to say about them. They're all tracks that sound like the majority of other worship artists.

All the artists that participated in the making of Here For You are well-respected and are considered some of the best at their craft. But it feels like most of them just recreate the same album over and over again, and it seems that they have taken the same approach to this Passion album. This would be a good album for those that attended the conference, and anyone who can't get enough modern mainstream worship music. Worshippers who are also music fans will probably be content just buying the DC*B tracks from iTunes or Amazon and calling it a day.