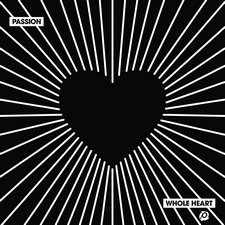 
The Passion worship band started way back in 1998 (three years before Chris Tomlin's own debut) as a worship collective doing yearly conferences. The band has continued over the years with only a couple of names being constants in the mix for 19 years. However, all of that changes on the 20th year of Passion as Chris Tomlin does not appear anywhere on the newest release, Whole Heart. It's been looking like Kristian Stanfill would eventually take over as the unofficial leader of the group for the past couple of years. While Tomlin's single appearance on last year's Worthy of Praise seemed to be proof positive, his complete absence from Whole Heart confirms that very thing. And while Stanfill assumes the helm, 2018's chapter also sees an increased role for Bellarive's Sean Curran as well. Perhaps Curran's increased presence could spell the end for David Crowder's appearances as well as the group begins to transition to a younger stable of artists.

Whole Heart starts off, and remains, much slower than the last few Passion albums. Stanfill has been opening the Passion recordings with upbeat and fast songs in recent years, but this time he opens with a much more moderate tempo, and the entire hour-plus run time remains at that level or below. As with most Passion releases, the lack of diversity in tempos leads to a pretty monotonous listen in general. The songs end up bleeding together, and at times, you only realize that the track has changed because you notice a new voice leading. Not surprisingly, Crowder's "Ghost" is the strongest new song in the bunch. Crowder has a special way of making his music stand out from the crowd and does so with "Ghost" as well. While his song about the Holy Spirit doesn't necessarily stand out in the mix like a sore thumb, Crowder's lyrical approach shows why he's one of the best. The most exciting song on the album, though, is the rendition of "All My Hope" that Crowder does with Tauren Wells. The gospel song was a favorite from American Prodigal, but Wells' soulful voice leading the way really takes it a step further -- especially when the third verse comes around. This is a killer track on any album and a perfect way to close things out.

Whole Heart as an album is fine, but that's about all it musters. Musically, it's okay, but it's altogether safe and typical. Lyrically, it's worshipful, but it doesn't challenge the listener or offer any sort of profound messages. Passion arguably hit an all-time with Salvation's Tide is Rising, but has been in decline again ever since. 2018's entry has David Crowder, Tauren Wells, and Sean Curran providing the best content. "All My Hope" is possibly the best song to ever appear on a Passion album in 20 years, but the future seems to be unclear for the first time in the group's history. It's likely very safe to say that Passion will be back in 2019, but who knows what this time of transition and change will yield. Until then, long-time fans of Passion and their ministry will get their yearly fix with Whole Heart. However, those looking for a little more than the average should look elsewhere.