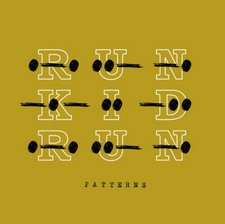 After Run Kid Run's very accomplished sophomore project, Love At The Core, the pop rock group's third album was pushed back some months before its final release date was set. Now, with an all-star production cast (Matt Thiessen from Relient K and Mark Lee Townsend), Run Kid Run is back with their latest album, Patterns. Does their latest follow the pattern (pun intended) of their last album and continue to show growth, or does Run Kid Run offer an average pop rock release like their debut album, This Is Who We Are?

Unlike the band's first two albums, Patterns stumbles a little out of the gate with their awkward sounding "Farewell Old Self," which acts as an uncharacteristically short, mellow intro. When "The Last Hurrah" starts, Run Kid Run officially gives the album the gas and the album doesn't begin to slow down until the final track. However, as Love At The Core progressed through the album, it was a thoroughly enjoyable pop rock adventure, but while Patterns offers nearly ten solid blends of pop rock/rock, the experience isn't quite the same. The central problem on This Is Who We Are was the lack of diversity among tracks, a problem Love At The Core dealt with effectively. Although most songs on Patterns sound great on their own, when the album is spun as a whole, too many songs sound the same and fail to be eventful. Also, the group tries to bring in an authentic rock song on multiple occasions, and the lead vocals don't always match the intensity required by the music.

Still a few highlights do emerge from the pack. The first single, "Back To The Basics," is a quality, energetic pop rock song, but while the song sounds great on the album, I get the feeling that it would be just pretty good on an elite project. However, "Sunburns" succeeds on nearly every level as every tune change turns out to be clever and catchy. The piano sprinkled within adds an artistic flavor and Matthew Thiessen's guest vocals bring the song to its pinnacle for the final refrain. "White Noises" is a distinct piano influenced pop tune, and "My King" is a decent finale, though probably the weakest for Run Kid Run to date.

Lead singer David Josiah Curtis identifies a problem he spots in our culture: "We can all get stuck in the same routines and patterns, and if we're not careful, we can find ourselves living in the same spot for quite a long time." The solution he puts forth in several songs on the album is to move past our complacencies ("The Last Hurrah," "Back To The Basics," "Promise," and "Sunburns"). In addition to songs about relationships, the band sings about more serious, spiritual matters on "The War Is Over" and "My King ("all rise ye children/whisper your praises now/sing hallelujah/your King is here").

Patterns fits all of the necessary requirements of an ideal pop rock project: the music is upbeat, easy to sing along to, and some punk flair inspires head-banging. But when it comes down to it, Patterns doesn't have enough of the kind of distinct material that made Run Kid Run's second album so good. The lyrics are also positive, but they won't ever drown you in depth. So, in the end, you could do a lot worse than Patterns, but it's a letdown from a band with more potential.

Let's face it: whenever we have to wait more than the standard two years for a new album from a band, it's probably not going to sound like we expected it to. Run Kid Run is no different. I know I was hoping for an upgraded Love At the Core, but musical tastes change. How can we blame them for wanting to write something different? I'll tell you how: when they simply take a clear step backward in progression. Patterns, to a newcomer who has heard none of their earlier music, could be a great find. It's just what you'd expect from Tooth & Nail. The guitar harmonies are enchanting, the vocal melodies are catchy (Your head will bop and you'll be singing along with the choruses after just a few listens). It's poppy, yet relaxing. But for those of us who have been in love with the improvement made in Love At the Core, waiting three years for a second date, it's a tad disappointing.

There were high points in Love At the Core that sent chills up my spine and made me forget my surroundings as they passed. Where have those moments gone? I can't help but think that the downtime has dulled the band's passion for songwriting. Patterns is still a quality album. Being produced by Mark Lee Townsend and Matt Thiessen, it's hard to go wrong (In fact, Matt Thiessen's influence is quite evident, especially on "Sunburn"). Were this their first or even second album, there would be more to praise, but it's not; it's their third. And it is unfortunately difficult to enjoy anything lesser than Love At the Core. New fans will love it, because it is a great album, but the backwards progression and the three-plus-year wait for new material don't match up. - Review date: 11/14/11, written by Wayne Reimer of Jesusfreakhideout.com