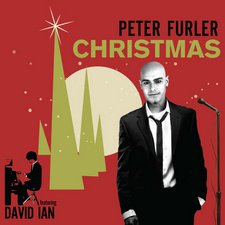 It's Christmas in October yet again. Every year, the bulk of the annual holiday releases for the Christmas season start releasing in early October (and sometimes mid-September). I haven't quite figured out the exact reason for this early of a release, but I have to imagine it has something to do with marketing. It gives time for the media types to review the material and fans to realize their favorite artist has a new Christmas album out before the season begins. Whatever the reason may be, reviewing Christmas music a full two months before the season starts is a bit trying. Thankfully, Peter Furler's addition, Christmas, provides a pleasant listening experience -- even outside of the normal holiday listening period. Furler teamed up with the jazzy and traditional Christmas music aficionado, David Ian, for his first holiday release. While many artists attempt to write new holiday classics or revamp the old, Furler and Ian do the opposite. These piano-dominating jazz renditions are quite plain, but do quite a bit to remind you just how great these old songs and hymns are.

Eight Christmas classics are done with traditional arrangements as Furler lets Ian do what he does best. "God Rest Ye Merry Gentlemen," a song that has always had a darker minor tone, is brightened up with a piano interlude inserted in around the half-way mark. One of the more enjoyable tunes follows with "It Came Upon a Midnight Clear." From some reason, this title doesn't get as much love in the Christmas covers as others, but the traditional Christmas feel makes this cut one of the best. "We Three Kings" doesn't hold up as well as others, but "O Come O Come Emmanuel" is nicely done for sure.

"Spoken Word Ancient Writings" is the first of two spoken word tracks. Furler reads different scriptures prophesying of the coming King, Jesus. Every year, millions hear the Christmas story read from Luke chapter 2, but how many times do we overlook that Jesus' birth was foretold so many years before. "O Come All Ye Faithful" is also a nice addition, but "What Child is This?" stands out a bit more. "Spoken Word Christmas Story" recounts the Christmas story, starting with the shepherds, found in Luke chapter 2. While "Ancient Writings" is a reminder to God's plan from the start, "Christmas Story" is a reminder that God always keeps his promises. "Little Drummer Boy" begins to wind the record down and is another stand-out. Furler and Ian do a great job on a somewhat awkward song that not many have done justice. Finally, the record closes with the ever popular "Silent Night." The track is the most stripped down and plain song on the album, but it works. It seems that Furler sings in awe of a loving Savior who was willing to come to earth for a very unworthy human race.

While Peter Furler and David Ian's Christmas is far from original, it is actually quite refreshing. People tend to love the Christmas season for so many reasons--the music is definitely one for many--but it's so often over-done and over-thought. Furler and Ian offer up some of most sung Christmas classics in a heartwarming and traditional manner. No matter what style of music you like, or if you like Christmas covers or originals better, it's likely that you'll find something to enjoy about this album. It's doubtful that Christmas will become your absolute favorite Christmas album, but it's very probable that it will be one you look forward to hearing every year. Each song is worthy of a listen and it will serve perfectly as the soft background music and soundtrack at your next Christmas party. Peter Furler continues to show how he's remained in this industry for so long. Simply put: The man knows what he's doing. Pick up Christmas and get in the holiday spirit a little early this year.

It should be pretty clear by now that Peter Furler is doing whatever we wants these days. So why not a Christmas album? It was surely on Furler's bucket list, and the Newsboys never released one while he was in the band. Considering the fact that Furler worked with David Ghazarian on Sun and Shield, the musical duo of Furler and Ghazarian (under the jazz persona David Ian) makes sense, and their result is a Christmas album called, um, Christmas. Before listening, the question might come up: is Furler really meant to be a jazz singer? Well, his voice has unmistakable personality, but compared to those of David Ian's past collaborating vocalists (like Tal & Acacia, Andre Miguel Mayo, and even Kevin Max), Furler's voice, perhaps, is not meant for this genre. In a way, it is refreshing to hear traditional favorites like "O Come All Ye Faithful," "O Come O Come Emmanuel" and "What Child is This?" played straight rather than with crazy guitars and drum solos, as can often be done by rockstars in Furler's position. The problem is, neither Peter nor David liven up these songs beyond other renditions we've heard. Even David Ian's jazz sensibilities feel subdued compared to previous work. While Furler's spoken Scripture passages do contribute to the album's feel, as a product, Christmas feels a bit like a missed opportunity. Maybe more creative arrangements or more unique song choices would have made the project more intriguing, but it's hard to fault the album's overall simplicity. The eight songs covered here would fit quite well shuffled in with a Christmas playlist, and who knows? With their rate of productivity, this might not be the last time Peter Furler and David Ian collaborate, and that's a good thing. - Review date: 10/5/14, Roger Gelwicks

Between his solo project and his work with Steve Taylor & the Perfect Foil, Peter Furler has been busy enough without having a brand new Christmas album to deliver to his yearning fans. But...he did that too, and he teamed up with holiday music specialist David Ian to do so. The duo took eight classic Christmas songs and arranged them in their own style (well, more Ian's style than Furler's) for the simply-titled Christmas. While some artists end up writing their own Christmas tunes when choosing to do this type of album, Furler and Ian chose to only do recognizable classics, from "God Rest Ye Merry Gentlemen" to "What Child Is This?" to "Silent Night." And they're all done fairly well, but are only mildly interesting, as they don't end up being truly memorable renditions. But the mild-mannered, light jazz tunes are right up the alley of those who like more traditionally-styled Christmas songs as opposed to the experimental stuff the popular bands of today bring to the table. In addition, I love the spoken word pieces from Furler. He reads some Old Testament prophecies of the coming of the Messiah in "Spoken Word Ancient Writings" and then reads the Christmas story later in "Spoken Word Christmas Story." They're wonderful additions to the album that remind us of God's never-failing Word. Fans of either of these artists will be pleased with Christmas, as will fellow Christmas music junkies. Even if it's still October! - 9/27/14, Scott Fryberger of Jesusfreakhideout.com

Surprisingly, Peter Furler has never provided a Christmas album despite all of his involvement in the music scene for more 25 years with his voice and pounding away on those drums. Here we have a very well-produced album with 8 timeless tunes that can once again be admired by one of our favorite artists. Much like Kevin Max's Holy Night released back in 2005, Peter (along with David Ian) orchestrates a very warm and easygoing compilation with a classical Christmas feel. The traditional tone in established songs like "O Come O Come Emanuel" and "What Child is This" still sound innovative because of Peter's distinctive vocals that we have become so familiar with since his days with the Newsboys. One can almost envision the snow settling on the pine trees and feel the warmth from a fire place next to your loved ones this holiday season with songs like "Silent Night" and "It Came Upon a Midnight Clear." Obviously, the songs are not original, but it's how these songs are composed that make this release such a worthwhile listen for Christmas time. - 10/7/14, Wayne Myatt of Jesusfreakhideout.com