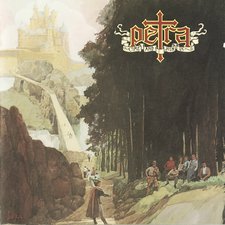 Petra
Come And Join Us


Three years after their fiery, eclectic debut, Petra returned for their sophomore effort, Come and Join Us. Changes were in the works with the band as drummer Bill Glover stepped down from the drum kit full time and a couple guest vocalists joined the recording, primarily a certain Greg X. Volz. The band was still experimenting with other styles, like funk and prog rock, but the overall Southern rock sound is clearly the core of the group's musical identity. There were also rumblings happening between the band and their label, Myrrh Records. Guitarist Bob Hartman had managed to get permission from Argent to cover "God Gave Rock and Roll to You" (and even permission to change the lyrics) and wanted the album to bear that title. Myrrh disagreed, opting for Come and Join Us instead. A tenth song had been recorded for the album, "Killing My Old Man," but, again, the label nixed its inclusion.

Given this mix of change and conflict, how does Petra's sophomore effort stand? Musically, it stands very strong. They continue to be something of a jam band that makes for a fun listen. Consider the opener "God Gave Rock and Roll to You," starting with acoustic guitars and building slowly to a full-on rock sound; it's an epic opening track. The other rock tracks here are also fun for a good jam, from the almost Renaissance sounding riff of the title track to the more frantic feel of "Without You I Would Surely Die" or "Where Can I Go." "Ask Him In" gives one the impression of a lost James Taylor track, while the fun funk of "Holy Ghost Power" covers a multitude of cheesiness in the lyrics.

While the music continues to be strong, the lyrics are vastly improved over their debut. Bob Hartman is starting to show signs of how he would write every Petra album hereafter, using more colorful metaphors and including theological points. The title track perhaps offers the best example, "We are like stones built together in a wall/Made up of whosoever the Master Builder calls/We are not worthy but together we are strong/Built on the Rock of Ages the wall is almost done." Even fellow guitarist Greg Hough's lyrics have improved, as seen in the passionate "Without You I Would Surely Die." However, he does contribute two of the most cringe-worthy tracks in all of Petra's history with "Sally" and "Woman Don't You Know."

For many bands, it's the sophomore album that makes or breaks them. For Petra, they were fortunate enough to get another try after Come and Join Us, and that record ended up being something of a breakout album. Still, this second offering shows promising growth in uniformity of sound and depth of lyrics (particularly on Hartman's part). Of the two albums featuring the original lineup, the latter is superior to the former. It's still a fun record to jam to, but it also contains lyrics worth chewing on. If you enjoyed the music in their self-titled debut, but didn't care for the lyrics, Come and Join Us is worth giving a try. Plus, it's only going to get better from here.