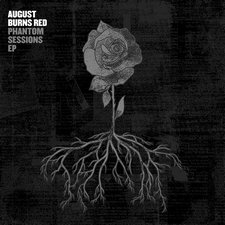 
The workhorses that make up Christian metalcore's most consistent band, August Burns Red, sound shockingly (and enjoyably) refreshed on their latest EP. Coming quickly off of the holiday EP, Winter Wilderness, Phantom Sessions functions as a b-sides to 2017's Phantom Anthem, an extremely solid effort that perhaps left a smaller impact than we'd come to expect from the quintet. That observation makes Sessions an even greater surprise, boasting five energized, inspired, and largely instrumental tracks.

Opening number "Midnight" is top-tier August Burns Red, sounding just as good as anything from the preceding LP, yet also brighter, as if the band is simply having fun, while also incorporating some of the "happy hardcore" guitar riffs displayed most prominently in the past on Leveler. The fun continues on the band's interpretation of the famous video game theme "The Legend of Zelda," a blast of a tune that should please both fans of the band and the game franchise.

As a change of pace, "Laniakea" (named after the galaxy supercluster) is a magical recording -- one where vocalist Jake Luhrs tastefully waits for half of the song before making a brief appearance. The whole tone and atmosphere of this song, which beautifully balances being both soft and heavy, as well as being an abnormally short song for the band, seems like new territory, and I would personally love to hear more like this from the band in the future.

The final two tracks connect Phantom Sessions more directly to its namesake, with an acoustic reprise of "Coordinates" and a MIDI recreation of the single, "The Frost." These tracks threaten to enter into true-fans-only territory, but "Frost" is as solid as MIDI songs come, and "Coordinates" is just as exciting and twisty-turny as the original version. As a minor complaint, the acoustic guitars sound thin and tinny, but that doesn't detract from the reprise being a lovely work overall.

While no official announcement has been made, ABR's consistent pattern of releasing a new album every other year means we should (hopefully) be receiving something later in 2019, and the ingenuity and energy that's exemplified throughout this EP suggests that the band might have another album just as great as Rescue & Restore hidden up their sleeves.

Ive always known August Burns Red to be one of the most technically proficient and impressive metal bands of the last decade or so. But until very recently, I never found myself actually enjoying their music. Very suddenly, it all just clicked. Phantom Sessions isnt a full, traditional ABR album, but rather acts more like a b-sides release that showcases the different layers of musicianship of the group. The opener is a fast and furious track that sounds like it could have been on Phantom Anthem, which is followed by a fantastic rendition of the theme from my favorite video game franchise, The Legend of Zelda. It also includes the dungeon theme from the original game. This track sounds like it was made for the Hyrule Warriors spin-off. On the subject of video games, the MIDI version of The Frost sounds perfect for a Mega Man game, and its a really fun listen. The middle tracks, Laniakea and Coordinates - Reprise, give us a great taste of their non-metal musicianship, with some atmospheric indie music, piano balladry, and a wide range of other influences. Phantom Sessions isnt a full album experience, but if youre somehow unfamiliar with the band, this will show you what theyre capable of. - Review date: 3/15/19, Scott Fryberger of Jesusfreakhideout.com