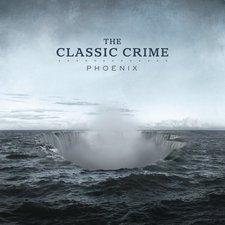 Mythologically speaking, the phoenix is a bird that never truly dies. After completing one life cycle, the bird begins its next life through an egg born by flames. In this sense, the beauty of the bird, along with its beautiful cry like that of a song, only makes sense for the title of the The Classic Crime's fourth career album. Now without a label to call home after the end of their contract with Tooth & Nail Records, the alternative rockers turned to self-production and fan-funded support to create their next record, and Phoenix is the spawn of these combined efforts.

With The Classic Crime's debut Albatross boasting mostly inexpert punk rock, both The Silver Cord and Vagabonds were unafraid to creep into unexplored territory for the band, and while not every song's attempt was completely successful, the outstretch for interesting melodies was never lost. The Classic Crime somewhat sticks to the shore for this effort, using an uncanny hybrid of The Silver Cord and Vagabonds' sounds. There are, of course, the occasional surprises that pop up, such as the astutely positioned violin and piano sections of "The Precipice" and the drawn-out, but still effective nature of "Heaven and Hell." The intro and outro to the album are also very fine additions and do create an elaborate atmosphere for the eleven tracks in between. With just enough experimentation to keep things moving, TCC continues to capture the alternative rock listener's ear.

Based purely on past precedent, a key diverging factor to TCC's approach is the lyrical frankness. Matt MacDonald's ruthless methods are truly one of his band's distinctives, but the catch to his brutal honesty is that it too often manifests itself as snide rather than virtuous. Phoenix displays a far more tactful approach to MacDonald's songwriting, however, but is hardly callous when discussing urgent issues. "Glass Houses" offers a stern warning to self-righteous Christians ("Somewhere deep down you know the difference/Between love and following orders/And if the chorus I sing is offensive it's proof that you've yet to address your disorder/You naively believed that your ship couldn't sink/but it did"), while the closer "City of Orphans" touches a similar line of describing the antithesis of misguided, self-destructive lifestyles ("If God could just hear us/we think that He's near, but He left long ago/we're a city of orphans/what do we do to ourselves?/We take all the good and the heaven around us and turn it to hell"). All in all, MacDonald yearns to resist sin ("Beautiful Darkside," "Heaven and Hell," "Dead Rose") and to pursue a meaningful existence ("The Precipice," "Let Me Die," "What I'd Give Up"), and they're honorably- and earnestly-explored journeys. The simmering passion for fixing the status quo is still there, but it's far more agreeable, and that's only a benefit to Phoenix's theme.

Upon surveying Phoenix through and through, it's still clear that The Classic Crime is still very capable of exploring more avenues, but The Silver Cord has yet to be surpassed. Of course, The Silver Cord: Part II isn't going to happen, nor should it; it would be petty and impertinent to continually expect The Classic Crime to strive for that goal. But with Phoenix operating on a noticeably smaller scale (and Vagabonds even more so), it's difficult not to compare it to what is TCC's magnum opus, and there's plenty the quartet can do to change up their approach for another shot at their personal best, especially now as an independent band. While TCC continues to evolve lyrically and adapt to new circumstances, they now have the new goal of building back up to epic proportions, and it may be the next album before they truly reach it.

Despite any unrealized potential, Phoenix very accurately sums up The Classic Crime's approach as an independent band: a renewal of practical and thematic measures. TCC is more than willing to try new things and plow through their songwriting process with determination and conviction, and there's plenty to showcase as a driving, convincing, and always thoughtful rock project. With the band's Tooth & Nail days in the past, Phoenix rises from the ashes to thrust the foursome into a new chapter of more uncertainty-one that's begun with among the finest and most fiery of notes.

- PReview date: 7/30/12, written by Roger Gelwicks of Jesusfreakhideout.com class="coversize" align=right> Early Thoughts...
Another well-loved and newly independent rock band in recent years, The Classic Crime parted ways with Tooth & Nail Records after three albums of alternative rock goodness. But like many formerly-signed artists, they went the way of Kickstarter to fund their next venture, and this choice proved to be all the more worth it; with specifically $86,278 in donations from fans, TCC's fourth studio album, Phoenix, was born. TCC has always been a polarizing band with regards to their pointed, sometimes even controversial, lyrical strategies, and Vagabonds was particularly indicative of this volatile passion. To their listeners' benefit, Phoenix seems to capture the same level of this fervor at a far more agreeable, and effective, pace (despite gloomy-sounding song titles like "Beautiful Darkside," "Let Me Die," and "Dead Rose"). Matt MacDonald sings powerfully through the thirteen-track epic to contemplate life's significance, and the album only feels more cohesive with this overarching theme. Some tracks, such as "You and Me Both" and "The Precipice," continue the musical precedent of Vagabonds, but "Young Again," "Glass Houses," and "What I'd Give Up" bring the listener back to The Silver Cord's sensibilities and an impressive range to draw from. An ambitiously and decisively constructed project, Phoenix looks to be one of the more inspired rock albums this year; while Kickstarter funders will get on the inside track two weeks earlier, the Phoenix's eagerly-awaited flight officially begins August 14... - PReview date: 7/30/12, written by Roger Gelwicks of Jesusfreakhideout.com --->

After releasing four albums with Tooth & Nail records, including their last release, Vagabonds, The Classic Crime continues with a surprisingly different approach with Phoenix. This project is filled with many thoughtprovoking lyrics which involve some pretty serious subject matter like suicide, pride, acceptance, and unconditional love. One of my personal favorite lines are from the song, "Young Again" which is dealing with the issue where one regrets that they haven't had a fulfilling life: "Every thought is a blessing / Every breath that you take / Everything outside of right now is illusory / It's not real / The past, the future, they don't exist / All you have is now / Is this enough for you?" One of TCC's most memorable and emotionally driven songs to date, "The Precipice," flows so well and has such an enjoyable resonance that it's destined to become an instant favorite as it deals with one's acceptance: "Whatever the cost / whether it works out or not / I'll follow you with my heart." "Dead Rose" signals a change that takes place when we depart from our old self and enter our new life with God: "Dead rose, I don't love you anymore / We'll look back on the day / when the dead rose from the grave / No more sorry and shame / The new body and name / Nothing perfect will die / No more tears in our eyes / No more worries and trials / We'll have faith like a child's / When I come through that open door." Phoenix is a welcome collection of songs that has been in the waiting since The Silver Cord was released four years ago, and it seems that the definition for the word "phoenix" is appropriate when describing this compilation: "A person or thing that has become renewed or restored." This album is proof that good things can come from Kickstarter funds. Some enthusiasts might object to Phoenix as a more toned down record when compared to previous efforts, however, it does have several songs with an edge like "Glass Houses," "Young Again," "You and Me Both" and "Painted Dreams." Phoenix is, for the most part, a release that is unforgettable both musically and lyrically, and it should please existing fans as well as inspiring new listeners. - Wayne Myatt, 8/12/12