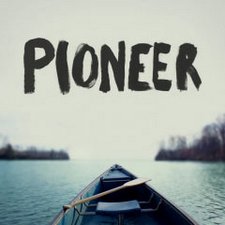 Somehow, naming a band Pioneer seems a little dicey; the implication is that the group has gone into the land where no man has gone before and settled there. The trouble is Pioneer, a five-piece American rock group from Indianapolis, Indiana, is a little late to the party that already features Relient K, Stellar Kart, Everyday Sunday, Run Kid Run, and The Wedding (among others). In light of the aforementioned bands, what could the band's self-titled debut possibly have to offer?

The album, recorded with help by Mark Townsend (Relient K, The Wedding), is an energetic pop rock project that has rock and pop/punk leanings. The upbeat tunes throughout the release are almost always enjoyable, but a few stand out above the rest, like "Catharsis" and "Coming Of Age" (the latter has an especially impressive chorus). The first single, "Treason," is a catchy, guitar driven pop/rock song with some bits that are similar to something you might hear Philmont offer. "Lights" has a softer edge, and the tune is reminiscent of Mainstay's single "Becoming Who You Are."

The quick pace of the album is split down the center by an instrumental interlude ("Mantua") that really doesn't benefit the album, but the acoustic, minute-long, album intro ("Clarity") serves well as the prologue. The solid and soft "Reaching" feels a little too much like an obligatory ballad than an absolutely earnest one. However, the acoustic guitar driven "King In Rags" has lots of emotional firepower, and the progressive tune ends the album on the highest of notes. Despite all that the band does well, there are a few rookie missteps. The sporadic "Woahs" are not always used in cutting-edge fashion, and there are a few songs that are just fun but not really memorable.

If there is one consistent theme that Pioneer tries to get across, it would be the idea of reaching past complacency and sin toward a better state. "Dreams" laments the loss of the ambition the singer used to have, but "Better Days" finds that brighter horizons lie ahead for those who don't invest in the things of this world that fade away. Even with our fallen natures, the band encourages listeners in "Reach" to be like Christ ("we were made to be failures from the start/that doesn't mean we don't reach for something more than we are"). The singer on "Catharsis" recognizes God as the only one who can save him from his "fatal attractions."

Right now, I'm willing to state that Pioneer is the best new artist of 2012 thus far. Now, over the course of the next eleven months, every oncoming album and debuting artist are going to take a shot at Pioneer's position, but until that happens, Pioneer has left us with one of the best pop rock albums I have heard in a long time. Although there are some existing flaws and Pioneer didn't invent the wheel they now ride, it spins remarkably well for a new band.

Since the rebranding of Eden Records, which includes the formation of Slospeak Records, the label has been taking noticeable steps toward growing, but hasn't actually released a Slospeak album yet. This month, that changes, with the release of the self-titled album from rock band Pioneer (formerly known as News From Verona). Pioneer is a good dose of alternative rock with some pop punk qualities. A lot of the album (style, vocals and some musical tendencies) reminds me of the debut album from The Wedding, with a little hint of Run Kid Run mixed in here and there. The album's lead single, "Treason," is very catchy, with well-played guitar hooks and gang vocals that are fun to sing along with. While Pioneer does have that fun factor in tow, they also manage to get a little more serious when needed as well. In "Coming of Age," vocalist Josh Randolph speaks candidly to a friend who seems to be wasting his or her life away, with Randolph explaining that "I like you so much better when you're not drunk." Pioneer ends the album with "King in Rags," where they, in a matter of words, encourage friends and family not to spend their time worrying. Pioneer seems to be a good fit with Slospeak and their current signees. This album may not be on many top ten lists at the end of 2012, but Slospeak's passion for the growth of their artists mixed with Pioneer's talent equals big things in their future. - Review date: 1/18/12, written by Scott Fryberger of Jesusfreakhideout.com