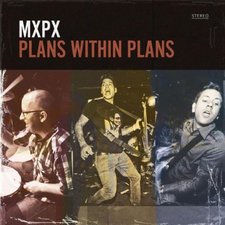 Let me start everything off by being completely honest and upfront with everyone. I've been listening to MxPx since 1995 and they have been my favorite band since 1996. I have all of their albums, EPs, compilations they released a special song on, and a lot of vinyl. That being said, I promise I went into this review with the same view as any other. So, there's my disclaimer.

MxPx has been around for 20 years and is now releasing their ninth full-length album, Plans Within Plans, on top of seven EPs, two cover albums, a live album and live DVD, a Christmas album, four different compilation or B-side albums, and three movies. By all accounts, they are a legacy band that many have named as inspiration. Sad news came in recent years when Yuri quit the band and Tom picked up a normal job. It seemed that the Bremerton trio was done. Fortunately, fan support from two separate "Life in General Shows" kept the boys together as a band with the only change being a significant decrease in their usually extensive tour schedule. The question is, "Do these veterans who have toured the world for the past two decades still have the chops to be relevant?"

Plans Within Plans starts on a very positive note with the first track, "Aces Up." The fast punk song is classic MxPx and will quickly bring a smile to any fan's face. If you are new to the band, the track should have you thinking these guys are legit. The heavier "Screw Loose" follows with a vibe similar to Pokinatcha or the path they took with a couple of tracks on Secret Weapon. The trio keeps the fast-paced punk rock flowing with "Nothing Left." The opening three tracks are highly reminiscent of early era MxPx from Teenage Politics to Slowly Going the Way of the Buffalo. It's really a reminder of what punk music sounded like before pop completely seeped into the sound. With that being said, the pop is about to seep in.

Though there is a catchy bass line to open the track, "The Times" is the weakest song on the album. It's pop-rock at best with very little punk influence whatsoever. The song contains a positive message of moving on through hard times claiming, "Every day is better than the one before," but really falls short of expectations of an MxPx song. "The Times" feels like a mix of something found on The Ever Passing Moment and Panic. The fast punk kicks back in with "It's in the Past" on the next track. The song also features a Tom Wisniewski solo, which really isn't an all-too-common occurrence. Next up is more Ever Passing Moment era MxPx sound in their second track about "times" with "Best of Times." The song takes a different approach, but the theme is shockingly similar to that of "The Times." The most disappointing aspect of the album is that they included two songs so closely related not only on the same album, but only one track apart. Perhaps the guys were just feeling extra nostalgic?

The Panic sound returns with "Stay on Your Feet." The song is one of encouragement and proclaims, "Stay on your feet. Take it as it comes, but don't retreat. Stay on your feet. You gotta take a risk and face the heat; stay on your feet." It's eight tracks in before you hear the signature song about a girl and love. In yet another fast-paced punk song, Mike Herrera claims he's a "Lucky Guy." The next track is the first single and the song featured in the closing credits of the Both Ends Burning DVD, "Far Away." It's one of the albums best, has a great sound, and even features a breakdown with some yelling from Herrera. "Cast Down My Heart" features a sound reminiscent of The Ever Passing Moment. Its highlight is the solid pop-punk bridge that really ties the song together.

The second to last track, "Inside Out," is another solid, fast-paced punk song that sounds like it's straight from Buffalo. The final track, "Nothing's Gonna Change," steps to what a lot fans consider a dark place in MxPx history with a song that sounds like it belongs on Before Everything and After. The tune sounds similar to that album's first single, "Well Adjusted." Despite the similarity, "Nothing's Gonna Change" holds its own and features a drawn out, repeat ending that serves as a good conclusion to the album.

As far as spirituality in the lyrics, this album is pretty lackluster. In fact, there are no real mentions of God throughout. Despite the lack of spiritual relevance, the album maintains a positive attitude with positive messages as MxPx fans have grown accustomed to. Is the album the best of the bands history? Not even close. Is it a solid record that you can jam to in your car as you sing-a-long? Absolutely. While some may feel that the sound is not fresh and the band has released better songs with similar sounds, others may enjoy and appreciate the retrospective that is Plans Within Plans. Usually that type of thing is saved for greatest hits albums, but I can't help be drawn to the nostalgia this album invokes. If you are a new listener looking to check and see what these veterans have to offer, this isn't the place to start. Try something like Life in General, Slowly Going the Way of the Buffalo, or even Secret Weapon. With top tracks like "Aces Up," "Nothing Left," "Far Away," and "Inside Out," this is a must-have for any established fan of the band.

When all is said and done, I, along with many other long-time fans, am ecstatic that MxPx is still intact with all three members hanging around to make more music. They deserve a lot of credit for making it to the twenty year mark, which is next to impossible given the state of the industry today. If you are a fan of punk or pop-punk, do yourself a favor and check out Plans Within Plans. It's nowhere near groundbreaking or a career best, but it is a fun listen you should still get enjoyment from after a couple of listens. If nothing else, it will have you wanting to break out all of your old Magnified Plaid albums.

Was it really twenty years ago that MxPx formed in the Pacific Northwest town of Bremerton (immortalized in the song "Move To Bremerton") and jammed in basements and garages after school? In light of this anniversary, it's appropriate that Plans Within Plans hearkens back to their early sound, with raucous three chord riffs, light speed vocals and martial drumming. Opening numbers "Aces Up" and "Screw Loose" sound like the band fired up the time machine and transported songs back from 1993. Both songs are little blasts of adrenaline that top out at the two minute mark. But with titles like "In The Past," "Best Of Times" and "The Times," it's clear that time has passed and the boys are a little more experienced and wise. Thankfully, this maturity has lead to writing songs that brim with contentment and hope and not the typical punk rock nihilism. MxPx, like any artist who has been around for twenty years, has seen their fortunes ebb and flow, big crowds one year and smaller ones the next. It's a testament to their friendship that they can weather the changes well and still write positive tunes that celebrate the little things in life in general.

Punk music is like salsa; a little goes a long way, but you are always thankful to have it in the cupboard when the occasion calls for it. In the same way, it's great to have MxPx back on the scene, sounding as fresh as they ever did. - 4/2/12, Tincan Caldwell of Jesusfreakhideout.com