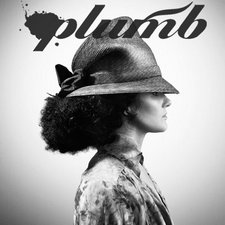 It's been fifteen years since Tiffany Arbuckle stepped out from among the members of the group Benjamin to front her own industrial flavored rock project. Over the years, Plumb has morphed from a band to the identity that Tiffany has adopted, and as she's settled down as a wife and mother, it's been exciting to watch how her music has evolved along with her changing life. However, what hasn't changed is Plumb's passion for music and her continued interest in creating fresh new songs.

As fans wait for the release of her next album (her first studio album in four years), Faster Than A Bullet, which the artist just completed this week, a limited release sampler of cuts from Plumb's albums released from 1999 to today has been made available via NoiseTrade. All of the songs included here can be found on her 2009 hits collection, Beautiful History, and as such, it's a great sampler of some of Plumb's most notable songs she's produced in recent years.

When glancing at the tracklist, however, you'll notice two intriguing track titles: "Damaged (2011)" and "Blush (2011)." These tracks are remixes, re-creations of those songs (it's likely Plumb has re-recorded the vocals for these as well). This is the fourth time "Damaged" has appeared on a Plumb record since the song debuted on candycoatedwaterdrops in 1999. "Damaged" was given a fantastic extended version in 2006 on Chaotic Resolve, which then appeared again on her 2009 hits project. This third mix is given a slow grooving electronic beat, which replaces the more atmospheric, softer approach the original took. The piano touches were dropped and the drum beat has been simplified, bordering on just sounding like it was made on a Casio keyboard. But Plumb adds in an industrial synth rhythm that's somewhat of a 90's throwback. It's a neat take on the iconic Plumb track, giving it less of an emotional lament feel and more of an angry response to the abuse it was inspired by. "Blush (2011)" is more of a stripped down version of the song that opened her 2006 album, Chaotic Resolve. For this new take, the guitar from the original is dropped, as well as any kind of beat at all. This romantic ballad is solely driven by some soft synths and Plumb's signature vocals. As an additional version of the song, it works, but if it were meant as a replacement, it pales in comparison.

Aside from the two brand new mixes, this EP includes "Beautiful History," the newer song exclusive to her hits project, as well as the single "In My Arms" from her 2007 lullabies album, Blink, and two remixes from the bonus disc included with Beautiful History, "Cut (Bronleewe & Bose Radio Edit)" and "Hang On (Digital Dog Radio Edit)." Collectively, the EP is a nice sampler of what Plumb has been doing musically for the past five years, and it serves as a reminder why listeners should be getting ramped up for Faster Than A Bullet (which has a new single releasing August 30th, featuring a duet with Jars of Clay frontman, Dan Haseltine). If you have all of these songs, grab this sampler for the pair of 2011 remixes, although you can also get those tracks separately as a free download at plumbinfo.com. If you're unfamiliar with Plumb's music, the NoiseTrade sampler (2011) is a decent, no risk introduction, given it's free to download (for a limited time), but definitely still worth shelling out a few dollars for.