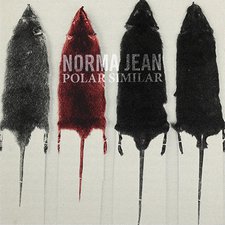 
Very occasionally, there is a band that has "the full package", so to speak. They have the fans, the tours, the talent; but more than that, they have the musical progression over years and years that shows their passion for music. Many bands come and go. Talented, yes, but they disband after a while because of this or that. But occasionally, a band endures because music isn't just one part of their lives, but their very lifeblood. The Almighty Norma Jean, earning the moniker, fall under this umbrella.

You might think I'm pandering to my own bias, but I feel confident this description can be given objectively, especially with the release of their newest album, Polar Similar. Ever since their 2010 album Meridional, NJ have taken a turn for the melodic. And over three albums now, the frenzied, aggressive style they made their name on has taken on a more structured, but no less aggressive, form. Their music is like a garage band practice session, at the very moment that the cacophony of individual instruments synchronizes into that perfect, accidental harmony. The exception is this is no accident.

Polar Similar takes what was started in Meridional and honed in Wrongdoers, and perfects it. A lot of the time, the majority of their songs still switch between melodic choruses and what I call "classic chaotic" (and even then there is usually a layer or two of guitar hooks behind Cory Brandan's screams), but there are much fewer moments where the song doesn't seem to be going anywhere. It's clear that with every single juncture of the album, they analyzed, and if it was generic, they broke it down and made it creative. This happens over and over again. There isn't a single predictable moment on the album. But this isn't executed poorly like it often is, resulting in a big mess of disjointed parts. It all feels like a progressive miracle. The shape of the songs is continually changing, but the structure doesn't break down.

Nothing is empty or shallow. We hear a catchy drum pattern, followed by two, then three layers of sultry, buzzing guitar rhythms. A shaker adds another tempo. Then Brandan's unforgettable screams burst on scene, "I hope you burn! I'll be the king of the ashes." Then we hear an eerie chorus of droning clean vocals, "What you're feeling is the loneliness of God." That's only the intro track, "I. The Planet". Following this, we are treated to Brandan's widest range of vocals yet, rising and falling effortlessly from yelling to singing to all out screaming that conjures images of his beat-red face. Around every corner is a new, strange, and probably unnerving guitar tone whining while the bass meanders in the background.

Every chorus or bridge that could be generic just isn't. NJ have tapped into a seemingly bottomless reservoir of originality, yet it all sounds unequivocally like Norma Jean. At times, they borrow elements of black metal, punk rock, hardcore, post-rock, and not to mention the pure syrup of mid-2000s metalcore they still channel with gusto. Then, in the middle of the album, the track "Reaction" contains a section featuring some south-western guitar twang. This filters even further south into the second interlude track of the album, "III. The Nebula," which sounds like the soundtrack to the slow-burning sun of the Mojave. For the remainder of the album, it seems, NJ's southern roots come out in full. "The Close and Discontent" nearly reaches Maylene-levels of southern metal, and is easily the most unique song they have ever written.

Lyrically, Polar Similar deals with some pretty heavy content, most of which centers around the topic of abusive relationships. "1,000,000 Watts" is brutal in its representation of the abusive, apathetic partner. "But you're broken on the inside, baby; and that will never have the final say. I feel bad that you're angry, but I'm sorry, I don't care for what it's worth. And if it ever comes down to me or you, you're probably going to die." "Synthetic Sun" addresses the issue of growing up too fast, "Pace yourself before you run straight into yourself. Are you feeling alive if the sun doesn't come outside?" In "A Thousand Years A Minute," we see an unhappy, emotionally abused speaker learning, perhaps for the first time, the true nature of their relationship. "This is what I tell myself to pacify the room, 'I Suppose living like this is good to you?' I'm taking what you're giving, but the giving takes away."

It should be noted that there are a few cuss words in this album, including one f-word at the end of "1,000,000 Watts". This doesn't seem to be a new issue in the Christian-affiliated music circles, but a growing trend. Though Cory Brandan is a self-proclaimed follower of Christ, and Polar Similar is a Solid State release, Norma Jean is by no means a CCM band. Brandan has been a long-time advocate of the "less Christian music, more musicians that are Christian" argument. So take this information as you may.

Just when I thought that NJ had peaked with the previous release, Wrongdoers, they one-up themselves again. They've been perfecting the same signature sound for so long that they now know how to make every single second of music meaty and filling (disregarding one certifiably creepy interlude track that plays an excerpt of the Lincolnshire Poacher number station). Polar Similar is a musical thrill ride that exemplifies just how essence can be maintained without becoming stale.

Listening to Polar Similar, I was suddenly struck by the fact that metalcore actually used to be good. There was a time when bands were creative with their songwriting and didn't just play breakdown after breakdown in an endless stream of sameness for 45 minutes. Polar Similar is a throwback to those days. It's frantic, visceral, angry, and surprisingly melodic. You could write multiple paragraphs just listing the great bands that clearly influenced this record and still not capture how utterly unique this album is. At the same time, every past era of Norma Jean makes itself heard while still managing to be cohesive. The musicianship is diverse and flawlessly executed. Cory Brandan hits a huge range with his harsh vocals and his cleans are melodic but still unpolished enough to maintain the music's edge. Sure, the two interlude tracks don't really do anything, but the rest of the album is nearly a non-stop highlight reel from the slow burn of "1,000,000 Watts" to the increasingly fractious and pummeling chorus of "An Ocean of War." Polar Similar is a magnum opus, and quite possibly the best album Norma Jean has ever recorded. It might also be the best hard album you'll hear all year. - 9/14/16, Timothy Estabrooks of Jesusfreakhideout.com

Polar Similar represents the completion of Norma Jean's evolution from a pioneer of chaos into a true melodic metalcore act. Not that they have gotten any less heavy, or that they are forced to rely on breakdowns at every turn, or that the lyrics have grown any less full of aggressive one-liners and cryptic commentaries, but nearly every song follows a defined structure and the lines between clean vocals and screams is very blurry at times. And it all works to their benefit. Norma Jean has never recreated an album, and with every step towards more melody, they take a step in other directions that keep them unique. While I still think Wrongdoers was a nearly perfect marriage of the old and new Norma Jean, Polar Similar won't lose any fans (unless they are bothered by the needless profanity on "1,000,000 Watts"), and will likely gain a few fans that like their metalcore a bit more structured. - 9/9/16, Mark Rice of Jesusfreakhideout.com

There's no stopping Norma Jean. Upon their return to Solid State after a two-album trek with Razor & Tie, the band has come out with perhaps their strongest album to date. Cory Brandan and company have put their all into Polar Similar, and it seems that nothing was off the table as far as sound and style were concerned. Metalcore, post hardcore, alternative, grunge...a Venn diagram of genres for Polar Similar would look very interesting, for sure. Brandan's vocals have been stretched to their max, with vicious screams, half-yells, and singing when appropriate, with ripe guitars and precisely-played drums that leave you with a sense that this is an accomplished band that wanted to give the listener the absolute best product for their money. Highlights include "Everyone Talking Over Everyone Else," "Synthetic Sun," "Reaction," and many others. As mentioned above, there is an instance of rough language; it's rather indistinguishable unless you know it's there or you're reading the lyrics, but it does put me off a little. Other than that, Polar Similar is a remarkable album, and any heavy music fan that doesn't already have a copy should go get one. - 9/11/16, Scott Fryberger of Jesusfreakhideout.com