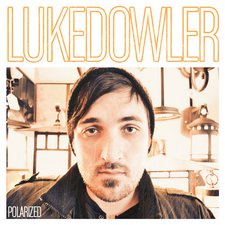 Thus far, 2012 has been a fairly big year when it comes to new artists in the Christian market. One of the record labels participating in this surge of new music is Dream Records. And though they've signed several new artists and have a few debut records scheduled for 2012, the one they seem to be publicizing the most is the new alternative rock record from Luke Dowler, called Polarized.

The first thing to say about Luke Dowler's music, at least as far as Polarized is concerned, is that it's a lot of fun, poppy alternative rock. Dowler's bio says that he's "Following in the footsteps of artists like [Bruce] Springsteen and U2," and it's fairly apparent as you dive in to his music. Maybe more the former than the latter though, as songs like "Hey Boy" and "Perseus" are dripping with Springsteen's signature guitar structure, vocal patterns, and melodies. What's cool about Dowler's music is that, though these influences are quite noticeable, it doesn't come off as a complete knock-off of another band. It's pretty rare to find that in newly-signed artists, and it's becoming more so with each new group.

Dowler's band has always had a changing line-up, but the musicians he's brought on board for Polarized have done some good work creating a rock album that sounds vintage but is also pretty accessible by today's standards. A lot of the album, though bearing a rock & roll vibe to an extent, is also chock full of radio-friendly tracks like the ballad "Collider" and the slightly overly-poppy "Umbrella." The latter of the two is one of the weaker moments of Polarized, but is definitely a "put a smile on your face" sort of pop rock song. You can also factor in a little hint of NEEDTOBREATHE's Bear Rinehart in the vocals. Maybe it's a stretch, but if you listen to "Polarized" and then NTB's "Drive All Night," you can probably hear some similarities. The big difference between Dowler and Rinehart is that Rinehart is a much stronger vocalist. In fact, Dowler's singing is the biggest downfall of Polarized. There are times where his voice works well enough to aid the music, such as the chorus of "No One Else," but most of the time, it's just really shaky and very weak. I actually find myself wondering how "Collider" made it on the record, as the opening verse is one of the best examples of this. In all honesty, though, it may not be something a good vocal coach couldn't remedy.

As far as lyricism, Dowler has his good moments and his not-so-good moments. I like some one-liners in "Perseus," where he says things like "I want a voice like a crowded street" and "I want to talk with more than just words." In the song "Gun," he aims to be culturally relevant, speaking truth in the simple lyrics "You can't change the world with a gun, you can't change the world without love." The song "One Thing" contains both good and bad lyrics; it's a worship song that shines of adoration for Jesus, singing "You blanket the night sky like a canvas catching sparks, You overwhelm me like a city skyline in the dark." As far as the bad lyrics, it's not that the writing or composition itself is bad, but it's that they don't really make sense. Dowler likens life without God to other things in life that are just incomplete, like "the night without her moon," or "celebrities without a silver screen." While the idea is easy to understand, the analogies fall a little flat when you consider that one night of each month is without a moon, and that a great deal of celebrities are not celebrities due to being on the "silver screen." Despite my nitpickiness, the rest of the song is rather solid, and otherwise a good worship song.

Luke Dowler's Dream debut is a surprisingly decent record that hits the spot on more than one occasion. Polarized is comprised of catchy rock tunes and pop elements that make for an overall enjoyable listen. It's not without its flaws; as I mentioned, some of the lyricism is less than favorable and it's really hard to get past Dowler's shaky vocals. But there's enough good in it to make it worthy of a few listens. For as much press and media push that Dream gave it, Polarized isn't a great album, but it does end up being one of the highlights of Dream's discography thus far.