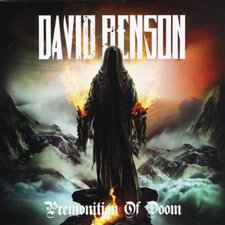 Some genres are well-represented, and some even over-represented in Christian metal. That's not the case with doom/stoner metal. There have been some great bands in that genre over the years, such as Trouble, Paramaecium, Seventh Angel and others, but when compared to a genre like metalcore, doom artists are relatively few and far between.

David Benson released a trio of albums in the '90s, and his last studio album, 1997's Premonition Of Doom, has been reissued by Retroactive Records. Benson and company sound very similar to classic Black Sabbath, with Benson's voice an almost duplicate of Ozzy Osbourne. If Ozzy is the prince of darkness, I guess Benson could be called the duke of light. Their singing styles are nearly identical, but their messages are polar opposites.

Premonition Of Doom is packed with thick guitar riffs and a classic doom metal vibe. The opening title track sets the stage with a plodding opening, backed with an eerie organ, before kicking in. Benson doesn't start singing until two minutes of the song have elapsed, giving the band a chance to establish their identity and show off some musical chops.

The downfall of a lot of doom albums is that the songs tend to sound the same. Benson does fall into this trap a time or two, but for the most part changes things up just enough to keep things fresh. There are a variety of tempos on Premonition Of Doom, and even shifts within songs, such as "Sin." It starts out as a mid to up-tempo groover before slowing down towards the end, and then speeding back up just before the finish.

In addition to the old school influences, Benson also incorporates some modern touches and mainstream sounds that could be compared to Ozzy's early solo material. However, Benson doesn't have the luxury of a legendary guitarist like Tony Iommi or Randy Rhoads.

One of the strongest tracks on the album is "Hellfire." It has an extremely memorable core guitar riff before the singing even kicks in, and the chorus is catchy as well. The most ambitious song is "Commissioned," a nearly seven-minute epic. It begins with acoustic guitars and a mellow tempo, then builds in intensity. There are several ebbs and flows throughout, making for a very interesting and well-done composition.

Even though the sound of Premonition Of Doom is fairly retro, the production is not. It's crisp and defined, and Jr. Moore's bass is pretty high in the mix, adding even more heft to the proceedings. If you're a doom metal fan and missed Premonition Of Doom the first time around, it's a worthwhile addition to your collection. [A little trivis for you: After his three solo releases, Benson went on to form the band Dbeality, which includes Stryper drummer Robert Sweet.]