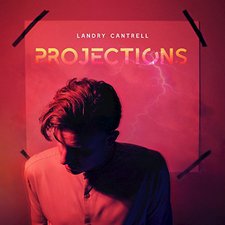 
Dream Records' latest addition, Landry Cantrell, isn't new to the music business. In fact, Projections is his sixth studio album, and yet it sounds just as a fresh as a debut. Perhaps this is because Cantrell signed with Dream Records this past Spring, already armed with tracks he wanted to use for his next album. Working with a new production team, combined with years of songwriting experience, works in Cantrell's favor, and Projections helps dispel any misconceptions about this tired genre we call CCM.

The album kicks off with the catchy, heart-pumping opener, "Before You." At first, this track sounds like one of those, "Is he talking to Jesus or his girlfriend?" songs, but thankfully Cantrell eliminates any ambiguity and finally says "But that was all before you, Jesus." One of the more unique highlights on the album is "Feedback," which features layered vocal harmonies and an electronic keyboard, giving the song a funky 90's boy-band sound. Another highlight is the mellow yet motivational "Fly," featuring catchy fingersnaps and a soulful electric guitar to complement the encouraging lyrics. "Indian Summer," the album's sole love ballad, features airy and beautiful vocals from Cantrell's fiancé, Kelsey Hicks. The track uses the interesting metaphor of comparing true love to an "Indian Summer," which is a phrase used to describe when summer weather extends past the end of the season, implying that it's long-lasting.

Cantrell and his production team certainly have their finger on the pulse of what makes catchy music as this album abounds with clean guitar chords, snapping, handclaps, and groovy synths. While the samples used throughout the album mostly work, there are a few instances where the production could have been scaled back a little. For example, the fingersnaps in "Louder" sound distracting, especially after having been used to greater effect in the previous track, "Fly." However, this is only a minor critique.

"Fade Out" sounds like a natural closer for the album, with its reflective tone and musings on how we want to be remembered when we die. However, Cantrell decided to add two more songs to the end, and while they are not bonus tracks, they feel as such after the stellar "Fade Out." "Underwater" musically rides the same current as "Fade Out," so it doesn't sound as original as its predecessor. "Move Me" is a nice marriage between pop and gospel, and the guest vocals from Lawrence Trump mesh nicely with Cantrell's, but the song doesn't fit in musically with the rest of the album, making it a bit of a red herring.

Over the past year or so, Christian pop has received a much-needed jolt of energy from artists like Jordan Feliz and Britt Nicole, and other CCM artists have tried to step up their production in response. Some have succeeded, some not as much, but Landry Cantrell has shown with Projections that there is hope for this genre yet. Lyrics that directly quote scripture, songs that explore a variety of soundscapes and topics, and passionate vocals all make Projections an album worthy of recommendation--for fans of Christian and secular pop alike.

June 2017 might be remembered as one of the best months of Landry Cantrell's life. Following two very solid albums that were self-released in 2011 and 2014, Cantrell's label debut, Projections, comes six days on the heels of Cantrell proposing to his now-fiance Kelsey Hicks. Hicks even makes a feature on the duet "Indian Summer," one of many highlights on this stacked album, which (by my count) currently stands as the best pop album of the year. The twelve gems on Projections, all written or co-written by Cantrell, strike balances between many different tensions: both fun and interesting, impressive and catchy, lightweight and thoughtful. How often is an album perfect for focused headphone listening and windows down summer cruising? The make-or-break for a good pop song is often its bridge; it's the point when we ask, "Is this just a rehash of what came before?" or "Should I press skip already?" Cantrell proves time and again that he crafts stellar bridges, elevating tracks like "Separate," "Dreamin'," and the B. Reith-lite "Feedback." In the bridge of "Indian Summer," the engaged couple sings a profound response to fears of the permanence of marriage. It's not all summery here, though. On "Deeper Love," and especially on its thematic antithesis "Underneath," Cantrell does what this genre so desperately needs; he sings like he actually knows the Christian faith. He isn't afraid to address the earnest elements of following Christ, while his constantly fabulous vocal performances and gorgeous harmonies make it all go down easy.
- 6/15/17, Chase Tremaine of Jesusfreakhideout.com