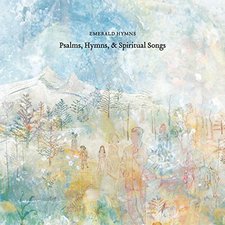 
With the wide variety of musical choices available to the music listener, it is getting harder and harder to weed through the mountains of offerings for the true cream of the crop. Emerald Hymns and their debut, Psalms, Hymns, & Spiritual Songs, is another new band vying for attention in the crowded modern worship scene. From the band's Indiegogo page, they make this aim; "Scripture gives a wide variety of examples for us to follow when it comes to worship and our music should reflect that. This album will include praise, lament, confession, songs of mercy, songs of justice, songs of hope and redemption." So, according to the members that make up Emerald Hymns, the band is aiming for a diverse yet cohesive sound, taking inspiration from both old and new texts. Were they able to deliver on that goal? Yes, and no.

I found myself frustrated with this release from the Seattle-based Grace Church band. On one hand, I have a personal affinity for hymns both old and new, and hearing an advance release of song "Lamb of God" had me excited to hear what else they would come up with. On the other hand, I consider myself a lyrics guy, and though I enjoyed the sonic palette they weave together throughout Psalms, Hymns, & Spiritual Songs, the repetitiveness of the lyrics began to wear quickly. But first, let me start with what works here, like the aforementioned "Lamb of God" with its understated beginning and gentle use of strings to plead for the "Lamb of God to/have mercy on us." Song "On Jordan's Banks" is another highlight with its basic piano that is then aided by the swells of strings and a low key drum shuffle. Also, track two, "Be My Treasure," is the most uptempo of this batch of songs and adds great energy after the laid back opener, "Come Messiah, Come." Lastly, album closer "Teach Me, O Lord" has some of its best lyric and music combinations as they end on a somber note pleading for the Lord to, "Teach me O Lord you way of truth/and from it will not depart/that I may steadfastly obey/give me an understanding heart."

My main critique of the album is, although it is a short album in length, it still feels long because of the repetitiveness of the lyrics. Often, for large stretches of songs we get a simple word or phrase repeated for two to three minutes of a song. On just a song or two it would be fine, but it happens repeatedly, especially on songs like "Have Mercy," which repeats the line "Lord have mercy on me" over and over as the only lyrics, tainting an otherwise great sounding song musically. "Cleanse us Lord," with a runtime of 1:41, follows with the lyrics, "Cleanse us Lord/from all unrighteousness/for you are faithful to, forgive." "Gloria" is next, and although a chorus of voices comes in later in the song, it's the simple phrase, "Glory to God," that makes up the only lyrics of the song. This is a shame because some interesting moments happen musically as the ending of the song picks up the pace and adds horns and piano to finish strong.

My lasting impressions are that Emerald Hymns has released an album in Psalms, Hymns, & Spiritual Songs that is chill, beautiful in sound, a great listen through headphones, and ultimately more suited for individual worship time than the typical congregational setting. Without the overuse and repetitiveness of lyrics, this beautiful sounding album could have been a major highlight release. As it stands, it is still a good album and is recommended for fans of mainstream artist Sufjan Stevens and Christian artists like Indelible Grace, Sandra McCracken, and The Brilliance.

I'm becoming a big fan of Gospel Song Records. With recent releases such as those from The Sing Team and The Eagle and Child, the start-up label is becoming known for high-quality and worshipful music. In early September, the label introduced us to an act by the name of Emerald Hymns. This new group of worshipers fits right in with the label's personality and roster, bringing a sound similar to The Sing Team and Citizens & Saints, and an album completely focused on worshiping the Lord and praising His wonderful attributes. Songs like "Be My Treasure" and "Oh Lord, You Are My Light" display absolute adoration for God. This is where the album shines; those who wish to sing songs of worship to God will enjoy this album greatly. Musically, it's not really memorable, and can even be a little dull at times. It's still worth checking out, though, if you want some new worship music to put on rotation. - Review date: 9/30/17, Scott Fryberger