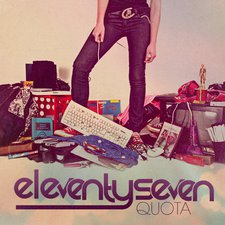 After being signed with Flicker Records for their first two albums, And The Land Of Fake Believe and Galactic Conquest, the trio known as Eleventyseven went the independent route to produce Adventures In Eville. The band's development of their techno pop/punk continues to improve over each of their releases, but those familiar with the group's lyrics will tell you that the band isn't exactly known for their deep wisdom or theological truth. So what happens when the band puts their high school themed songs behind them in their Quota EP? Some of the material is clearly business as usual, but some of their lyrics may surprise you.

The foundation of Eleventyseven's sophomore, Galactic Conquest, was built on a heavy electronic influence while Adventures In Eville leaned less on the techno music. But the Quota EP incorporates the electronic base of Galactic Conquest and matches it seamlessly with Adventures of Eville's catchy pop rhythm, without the occasionally weak sounds that were sprinkled in their second album. The EP starts off strong with the fast paced "I Don't Want To Fall," which is admittedly a little forgettable but is still infectious with each succeeding listen. The tempo slows somewhat for the guitar-driven "College Girls," which may take a few spins for the listener to fully appreciate the smart and quirky tune. "Divers In A Hurricane" and "Book Of Secrets" are both clichéd, fun, dance-fueled, pop/rock songs which would be easy highlights on any of the band's previous projects.

The title track boasts of an uncommon Eleventyseven genre venture which could be described as similar to Jesus Freak Hideout's exclusive track "Cody's Song." The quirky tune has, dare I say, an intriguing ska influence which is upbeat, as well as catchy. For their final song, the group delivers an updated version of 1980's A-ha's "Take Me On," which is a refreshing techno pop cover of a truly painful song.

As I eluded to in the first paragraph, Eleventyseven does have some interesting post high school thoughts, but, before I get to those, I need to make it clear that this pop punk band hasn't changed their lyrics that much. When lead vocalist Matt Langston sings "I don't wanna fall in love again/It hurts too much" on "I Don't Want To Fall" it comes across as corny line rather than clever one. However, the singer on "Quota" reflects on his life away from home, the difficulties that real life entails, and the singer's resolve to not stay under the thumb of corporate management which comes out as more thoughtful than evil experiments in hidden lairs and authenticity on MySpace. "College Girls" is even better as the song urges young men to treat young women with respect knowing that they will one day become moms.

Overall, Eleventyseven seems to be coming into their own as they grow more comfortable with their style with each release. Although the Quota EP is hopefully only a prelude to a full-length album which isn't that far down the road, it's a solid release that is great fun and has a surprisingly high amount of replay value. Even though there isn't a whole lot of spiritual truth here, Eleventyseven's bits of wisdom are worth taking home along with the Quota EP.