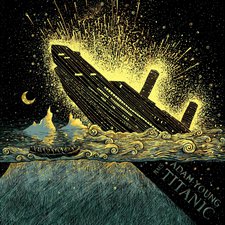 
We live in a world where Jon Foreman can put out a series of four similarly-themed EPs in less than a calendar year and be admired for his creative output (which, to be perfectly clear, is totally justified and praiseworthy). What then should be the response of people to Adam Young's endeavor to create and release a mini soundtrack each month of 2016? I honestly don't really know my reaction to that yet (probably somewhere between flabbergasted and awestruck), but if there is one thing that his first two entries have made clear, it is that Adam Young has crazy talent. And after using January to create his Apollo 11-themed work, February gives us Young's musical interpretation of the tragedy of the RMS Titanic.

With this go around, Young enters a fairly slippery slope. While Apollo 11 was a fairly original source material independent of inspiration from any previous major motion picture, RMS Titanic will almost immediately and inevitably be compared to the immortal blockbuster Titanic and James Horner's Oscar-winning score. But Young wastes no time to differentiate his own work from Horner's. The very first tracks are "Southampton" and "Boarding." These events were interpreted as majestic and melodramatic in the film, but they are down-to-earth and uncertain with a touch of playfulness in Young's version. It was an interpretation that took some time to really sink in because it was hardly what I might have expected as an interpretation of the moment that essentially revealed the giant engineering marvel to the world, but when I thought about it, it made total sense. Most people weren't riding the ship for the novelty of it, they simply wanted to immigrate to or visit America. It was a means to an end. In a way, "Southampton" and "Boarding" seem more like a song for a nervous immigrant than a great ship.

Young's other interpretations didn't come across quite as originally as the opening track, but that is easily forgivable since that very setup puts to rest any fear that Young is creating a Horner copycat. Plus, I don't know if there are many other ways to interpret some of the events in the Titanic's life in order to elicit appropriate images and emotions (the entire purpose of a soundtrack). The job of a nighttime crow's nest crewman seems to beg for long, sustained dissonant chords that teeter on the precipice between boredom and fear, as Young proposes in "Lookout Duty." How can hitting a fatal iceberg not feel like a dramatic, chaotic crescendo like "The Iceberg?" And how can any song concerning the final sane moments of the ship not incorporate the hymn "Nearer My God To Thee" as in "Lifeboats?" However, a few moments still leave me a little confused, particularly the songs "Silence" and "Survivors" towards the end, after the Titanic has sunk. In particular, "Silence" doesn't seem to elicit the right emotions in me; I feel like I should feel sorrow for the dead and the angst of waiting for rescue, but it instead elicits emotions of (for the first half) nostalgia and (for the second half) fear. Perhaps that is what Young had intended, but it still just doesn't seem totally right.

There is good reason to like this second installment in Young's year-long project, not the least of which being his effort to own his work rather than glean from something more famous and bombastic. And it is to his great credit. Between Apollo 11 and RMS Titanic, Young has set a very high bar for the remaining projects, and if he does hit that bar on every single project this year, I can honestly say Young's Herculean effort ought to go down as one of the most remarkable achievements of any Christian musician ever.