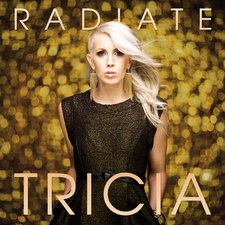 Two years ago, Superchick's leader singer put out the solo record, The Road, showcasing an entire new side to the singer's musical identity that mostly hit the right notes. Now with Superchick officially calling it quits, Tricia, the artist formerly known as Tricia Brock, transitions to a new stage of her career, and The Road was only a stepping stone to this future. Radiate, Tricia's second release, continues the story with mostly successful results.

This reviewer included, many were surprised when The Road wasn't the solo album expected from Tricia, as it purely relied on a "worship album" approach unlike anything Tricia previously released with her band. Radiate is a much more projected album to follow Superchick's footsteps, carrying an honest-to-goodness pop vibe that doesn't dabble in much else (though "Adding Up to a Miracle" almost sounds lifted from a long-lost Superchick album). The album's first four songs ("Everything As Loss," "Mirror Mirror," "Enough," and the title track) establish a rock-influenced and synth-based pop concept that clearly set the album apart from Tricia's prior work. From there, the eight remaining tracks try on a variety of hats, from heartfelt ballads akin to The Road's creative direction ("Daughter of the King," "Love Will Not Let Go"), to scaled-back cuts to inspire further introspection ("Without You," "What I Know"). In general, Radiate's approach works decently for a pop album, even if it doesn't take very many risks.

What is particularly interesting about Radiate is its uncanny comparisons with Tricia's prior work. Superchick, especially early on in their career, majored quite a bit on "girl-power" anthems (such as "Barlow Girls" and "One Girl Revolution" on Karaoke Superstars) and they became staples of Superchick's concept. Fast forward over a decade, and Tricia's approach to the same topics haven't changed as much as one might expect. Now in the role of a mother rather than a fledgling teenager trying to get her foot in the music business door, tracks such as "Mirror Mirror" and "It's Good to Be a Girl" come off as retreads rather than fresh takes on a familiar subject. The latter song is the most awkward inclusion on the record; lyrics like "I can be Wonder Woman one day, a damsel in distress/fighting off the bad guys in heels and a dress" border on cringe-worthy, and the call-and-response segment for the bridge reminds the listener just a little too much of a certain 1992 hit by Sir Mix-a-Lot. "Pity Party" doesn't deliver quite like it intends, either; giving teenage self-centeredness a sufficient tongue-lashing, but the chorus "she's gonna throw a pity party/and you're not invited" and the general air of sarcasm throughout the track give a less-than-endearing feeling. It's an odd mix of stagnated growth and aged wisdom, giving Radiate less polish than it deserves.

Practiced talent like Tricia Brock's isn't as common in the industry as it should be, and many artists from her generation haven't stuck around for as long as she has. Twelve years after Karaoke Superstars hit the scene, Tricia continues to sell her songwriting in convincing ways, as songs like "What I Know" and "Daughter of the King" especially work well for their intended audiences. Radiate seems to illustrate a willingness to write according to current life experiences, but it sometimes stays a little too grounded in past precedent to exceed as a cohesive pop album. That being stated, Radiate is the product of an experienced veteran with plenty of new tricks to try.