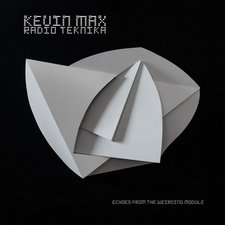 
Kevin Max, the artist, is tough to pin down. Though defining him has become a fool's errand, many have tried (this longtime listener included). The truth is, no one word fully fits, though "versatile" would certainly come close. Perhaps the greatest double-edged sword for Max over the years is that, although he had an indelible part of shaping Christian music with DC Talk, his solo output doesn't truly belong in the oft narrow confines of the genre. This is not for a lack of trying, with a brief stint as the lead singer of Audio Adrenaline from 2012-2014, covers albums, and a myriad of solo projects featuring different musical palettes. These wide-ranging expressions swung from euro rock, pop/rock, gospel, and indie to spoken word poetry, 80s new wave, and then a full-on electronic concept album among them. Commendable through all musical endeavors, is the fact he has always done it on his own terms. Sticking to his guns and following his creative muse wherever it leads has alienated some, but it has also cultivated a fierce following in the process, with Kevin happy to have it no other way.

Now, with his nineteenth solo release, RADIO TEKNIKA (Echoes from The Weirding Module), Max delivers another test of how far down the rabbit hole listeners are willing to go. This comes with a big assist from previous collaborating EDM group 3kStatic. Suffice it to say, if you couldn't follow the road less traveled down Romeo Drive, this newest undertaking may not be to your taste either. But if you'd like to step outside your comfort zone--if you'd like to test the waters of weird--then now is your moment to dive into the deep end. In short, Radio Teknika is not for the faint of heart. In fact, it may be helpful to think of Kmax as our Morpheus of The Matrix. Here he is holding out the choice to rebel against the CCM machine with a poetry slam/dance, or to return to the regularly programmed radio-induced deep sleep.

Less than a minute into "Come To Me," we've heard spoken word, techno dance beats and then the introduction of a saxophone. Though this combo could be jarring to some, it ultimately lands in a hypnotically alluring way that works across the sprawling runtime. Some longtime music fans may recognize the voice of Fleming McWilliams of Fleming & John fame who lends her big voice to the chorus of the defiant, though bopping, "None Of The Above." If this album were to have a single, then I'd look no further, as it musically has the most immediately accessible hook. Lyrically, he puts every political party and platform on notice, with no one safe from the brunt of his exasperation, past or present. Another song standout is the autobiographical "To All The Me I've Loved Before," where it's hard not to feel the ache of alienation communicated within. With "Jesus I Love You But Your Followers Freak Me Out" and "Black Sheep," we get perhaps the biggest peek into Kevin's spiritual mindset which appears to be one amidst deconstruction and reconstruction. He still claims Christ, though the relationship with pockets of our polarized Christendom is on shaky ground at best. Troy Baker of gaming and comic voice acting renown delivers a truly unhinged performance in "Balance Is Boring" that is anything but forgettable. Though it didn't land as a favorite for this reviewer, it definitely stands out.

Additionally, scattered among the previously mentioned highlights of EDM/spoken word that anchor the album are shorter more traditional spoken word pieces, like "Vampire," "Give Me Your Eyes," and "Abstract Travelers of Experience." This gives the album a nice variety, with all lyrics/poetry providing plenty to mentally masticate. All in all, this one's going to take some time to appreciate the nuances, so be sure to give the songs ample time to sink in beyond the initial shock of the medium. In the interim, these tunes should be cranked on a good stereo. One thing is for sure; Kevin Max remains relentlessly creative with a restless need to reinvent himself. Not many artists with a career now spanning decades could proudly say they've never made the same album twice, a feat to be celebrated. Clearly, there is nothing static about his approach to music-making.

All in all, this is an avant-garde and truly insightful, albeit, odd look into the psyche of Kevin Max. Surely, in many ways, Max is in a veritable no-man's-land, like musical forefather and CCM pioneer Larry Norman. It's the conundrum of being too "out there" for Christian audiences, and too "Christian" for mainstream audiences. However, it is in this tension that good and beautiful art is made. Thankfully, Kevin shows no signs of backing off his mission to provide an alternative to the status quo. Though his approach, and the eclectic musical colors he paints with, are not appreciated by all every time out, he has shown an increasing willingness to let his freak flag fly regardless of some listener's demands. Now, knowing what you know, the question remains: will you take the red pill of freedom, or the blue pill and return to your normal life? Radio Teknika awaits, but the choice is up to you. Just be sure, if you choose the former, to bring along your party shoes for these hippie dance grooves.