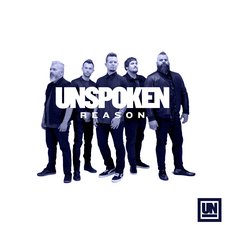 
Pop-soul band Unspoken continues refining their brand of uplifting, half-modern/half-retro CCM with their finest effort yet, Reason. The album wastes no time getting started with the title track, a radio-worthy blast of sugary melodies balanced with subdued music -- traits that are emblematic of the album as a whole. So if you enjoy "Reason" (and I highly recommend watching its accompanying music video), then you have every reason to continue enjoying the rest of this album's well-crafted pop gems.

Front-and-center are the vocals and lyrics of frontman Chad Mattson, who is almost so casual in his performances that you're likely to miss when he does something really impressive -- which is often. Whether he's singing alone, backed by a choir of his bandmates, belting out high notes, or nearly rapping (as on "Human Condition"), he is in full command of his skill set, carrying these songs even when they occasionally rely too heavily on obvious (albeit effective) chord progressions and song dynamics. (That said, the music itself is sometimes legitimately great, yet it's always unassuming. Kudos to a production team who engineered and mixed this album in a manner that the music never distracts or detracts from the vocals!)

If there are two traits I wouldn't expect to find myself praising on a pop album, it would be the lyrics and the strength of the album's back half, but on Reason, such praise is due tenfold. Much of the impact and honesty of these lyrics is likely due to the band's goal to write "songs for us"; and by penning songs that were specifically for themselves and their spouses and their children, their efforts have resulted in universally relatable songs that tap into some of the most basic truths of Christian life. This is true from track one to twelve, perhaps most poignantly seen on "Never Would've Made It" and "Can't Even Love Myself." Meanwhile, Side B charges in with "Already Won," which boasts the biggest chorus hook on the album, and we don't arrive at Reason's best song until track ten, "If We Only Knew." With a chorus that proclaims, "If we only knew / How deep the ocean of Your love / How powerful every drop of blood / How much it cost to rescue us / If we only knew / How far the East is from the West / How we are clothed in righteousness / How strong the hands that conquered death," the song is elevated to something truly special and profoundly powerful. (Check out Chad Mattson's appearance on the JFH Podcast for a deep dive into the story behind this song and the album.)

In an age when it's easy to accuse Christian pop music of being at an all-time low--as if radio singles arrive straight off of an assembly line of computerized beats, overused hooks, and clichéd lyrics--Unspoken's Reason is a shining exception of a talented band not trying to reinvent the genre or push the boundaries of the genre, but instead perfectly utilizing the genre for all of its thrills and benefits. Reason is a spiritually encouraging album that gets better with time and is simply fun to sing along with. I'll make the obvious pun one last time: you have every reason to go check it out.

Unspoken, that spunky group from Maine-via-Nashville, returns for their third album, Reason, with energy and melody to spare. The good time jams like the title track (with its nifty acoustic guitar line), the urgent and hopeful "Help Is On The Way," and the swinging "Human Condition," are just about as wide open and groovy as you can get. The band has been blessed with the gift of uplift, and they wield their gift well over the course of the album. The band's music is thoroughly modern, yet still has an organic appeal that's not over-dependant on studio trickery to sound fresh.

But just because the music is genuinely funky and full of groove doesn't mean that true depth is missing. The soulful, Gospel music-infused "Just Give Me Jesus" stands as a powerful, old-school testament to faith, while the convicting "If We Only Knew" is a sobering call to live in the light of what's been done for us in the death and resurrection of Christ. And the heartfelt and quiet "Mistakes" finds lead singer Chad Mattson delivering one of his best vocal performances while nimbly and sincerely delivering a clever turn of phrase against one of the best hooks of the year.

Reason is a contender for most tuneful and energetic album of the year, and Unspoken has shown that they are a band with true staying power. - Review date: 6/19/19, written by Alex Caldwell of Jesusfreakhideout.com

For most bands in the pop genre, it is a struggle to maintain popularity while creating fresh material at the same time. However, for Unspoken, it seems as if they accomplish this with ease, as each album has seen musical progression forward without falling into the cliches of the genre--and Reason is no exception. From the upbeat title track, to the reflective closer Wasted Time, Unspoken delivers many golden moments throughout the record. Highlights include the tender Never Wouldve Made It, the funky Human Condition," and the soulful Just Give Me Jesus. There is a lot offered here in the bands latest endeavour, and it is easily one of the strongest pop releases of the year so far. If youre a fan of the group, or just someone looking for a diverse record to spin this summer, Reason is definitely worth your time. - 6/19/19 James Larsen

Unspoken's new album, Reason, does not pack in as much fun as its predecessor, Follow Through, but in true Unspoken fashion, it is a soulful and accessible pop/rock album with some groove to it. Highlights include the anthemic "If We Only Knew," the catchy "Reason," the encouraging "Human Condition," and the touching "Never Would've Made It." - 6/21/19 Christopher Smith