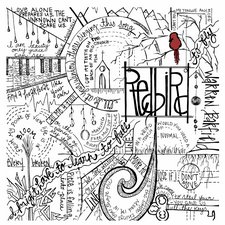 Warren Barfield broke out in 2003 armed with some hit singles, a refreshing southern acoustic pop sound, and all the potential in the world. Since then, he has experienced his fair share of ups and downs (both musical and personal) as he released only two albums between 2003 and 2012 and changed labels twice before going the independent route. He has never been entirely out of the scene (most notably having his song "Love is Not a Fight" featured in the 2008 Christian film Fireproof), but he has never approached the level of stardom that his debut seemed to indicate he was destined for. But after a four-and-a-half year gap, he has finally released his fourth album, Redbird.

From the very first notes of the lead song, "The Time is Now," you can tell that Barfield has foregone the radio-friendly sound that had permeated his previous albums. Instead, Barfield has dished out an ear-fest of southern folk, bordering several times on country, with a very stripped-down acoustic instrumentation that never even approaches the level of production in his 2008 album, Worth Fighting For. It is almost (but not quite) a straight-up acoustic album. Depending on what one was expecting, a little bit of adjustment is required the first listen or two of Redbird. Longtime fans might even be turned off altogether. But the fact remains that Barfield, who wrote or co-wrote all the songs and put together a brilliant production team (the legendary Wayne Kirkpatrick, country star Bryan White, and members of NEEDTOBREATHE, not to mention Barfield himself), has crafted a gem worthy to be heard.

The aforementioned opening track is the only song that could be described as a rocker, falling something between folk rock and a country jam. Barfield's southern twang in his voice is present in full force in this song (complete with some eerie "whoa, whoa's") about refusing to be idle in his convictions. The relaxing title track follows and is one of the lyrical highlights of this collection ("When your sky trades warmer blues for colder gray/ And everybody that you thought was true has flown away/ I'm gonna be your redbird"). "The Right Time," a quietly passionate ballad about warning against maintaining a rigid and well planned-out life, is probably the biggest potential radio hit here. This song likely would have been destined to be an overproduced, Mark Schultz-like tearjerker on previous albums, but here it is handled with delicate care not to have the music overdramatize the lyrics or Barfield's powerful baritone voice. Unfortunately, "Just Let Go" is a largely forgettable follow-up, but he turns it back up with the off-beat, energetic folk/country tune "Love Does," just begging the listener to tap their foot and bob their head along to the imagery of tirelessly sharing the power of love (I just made it sound cheesy, but trust me, it's not). However, the next track is the inexplicably out-of-place "It's All Good." It is far from a bad song (it is, in fact, quite enjoyable), but Barfield's acoustic stylings have taken a back seat to electric guitars and a drum beat, making the song itself sound like something taken from a Brandon Heath album. "Last Try" is another largely forgettable one, but its mood and short length make it work effectively as a relaxing pause into his next folk ballad, "They Don't Make 'Em Like They Used To." This endearing and nostalgic tribute to his family and unconditional love, mirroring God's love for us, is one of the album's biggest highlights (very possibly the best song on the album), as well as one of Barfield's most personal and faith-filled songs. In it, Barfield basically tells his family's story, starting with his grandparents, and how the love they all had for each other was so meaningful. And as the perfect follow-up to it, Barfield's wife Megan joins him in a gorgeous duet in the fittingly-titled "Once You Find Love," sung as much to each other as to the listener. And closing out the album is the fearless, forward-looking "For Now."

The amount of growth between Worth Fighting For and Redbird is actually staggering when you think about it. The last time we heard new music from him, his sound was dominated by radio-friendly pop songs and overproduction, both of which are basically eliminated this time around. Instead, he has given us a batch of personal, passionate, and meaningful songs that don't have to have their message emphasized by a lot of emotional background noise. Certainly, this album isn't as accessible as his previous work, and many might wish he would belt out his powerful vocals more, but everything that Barfield has done on Redbird, has been done very well. He has provided listeners with a fresh and immensely enjoyable collection of songs that truly deserve to be played. This album is a very rewarding listen and has been a long time coming for Barfield, telling the world that he is still a force to be reckoned with in Christian music.