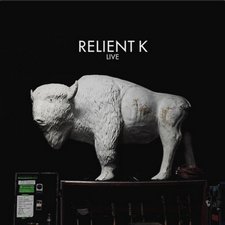 
Following their Live 2009 10" vinyl EP in 2016 from SMLXL Vinyl (which was launched by a member of Gotee Records), comes another vinyl-exclusive release, this time a 12" record, and this time from a 2016 performance. Captured on Switchfoot's fall leg of their "Looking for America Tour" in Raleigh, NC on October 29th, this vinyl release features nine cuts from the evening's 19-song set. While it's rather odd as to why so few of the songs played that night were included, the end result ends up being a decent snippet of music from the tour, and a nice snapshot of what the tour's set was like. I had caught the October 25th show at The Fillmore in Philadelphia, PA just four nights earlier, and found it to be a pretty excellent night of music. I had especially enjoyed hearing their new Halloween songs, too, which would end up releasing digitally just a couple days after I had first heard them live.

As it's presented, Live (2016) is a curious release. It opens with the first three songs from the evening's set, but then omits fan favorites "The One Im Waiting For" and "Who I Am Hates Who Ive Been." We're then given Air for Free's "Runnin'," but "Mountaintop" and "Forget and Not Slow Down" are left out. "Sahara" then finishes off Side A. It all goes by quite quickly too, and suddenly it's time to flip the disc over already.

"Air For Free" leads off Side B, followed by the fun "Mrs. Hippopotamuses'", but then the Air For Free highlight "Marigold" was cut, followed by the entirety of their The Creepier EP...er (ironically, this vinyl record released on Halloween, 2018, too), which consisted of "Halloween Blues," "Halloween in Owatonna," and (my personal favorite) "The Cup." Old fan favorite "Mood Rings" is next, though, which even includes a little quip by frontman Matt Thiessen about it "sort of being a Halloween song" (after the previous actual Halloween songs were left off), and then, not one but, TWO of the most popular songs of their career, "Sadie Hawkins Dance" and "Be My Escape," were also omitted. Finally, the saving grace of the vinyl track list is its finale, "Deathbed," which also includes a guest appearance by Switchfoot's Jon Foreman, since the bands were touring together at the time. It's a real treat to have a live recording of what is arguably one of the band's best songs, especially since Foreman could reprise his appearance from the original recorded version, too.

The sound of the recording isn't the highest quality; it's rougher than one might expect, but in a way, it gives it the feel that you're right there in the audience while listening to the record. Some live recordings are so crisp, clear, and near perfect, that they lose that "live" feel, while others are so poorly recorded that, even if it has an in-person feel, it doesn't sound great to listen to. Live (2016) falls somewhere in between, but more so leans towards bootleg quality. Thiessen's vocals are solid themselves, but the recording quality isn't super clear and it doesn't bring them to the forefront, as you might expect. It adds to the "in the crowd" vibe, but it does detract from the overall presentation a bit. In a way, you can understand why it's not being given the full, 19-track CD and digital release, but at the same time, you have to wonder why only 9 of the 19 songs have been released. (This would have seriously been amazing as a double-LP release of most--if not all--of the full set. One has to wonder if the band just didn't like the recording of the other songs on the set, or the track list was trimmed down merely to fit on a single vinyl disc.) Finally, if realizing the incompleteness of the track list isn't disappointing enough, there isn't a digital download code included with the vinyl purchase. Obviously, this isn't a deal breaker for vinyl buyers, but I, for one, have gotten in the habit of picking up vinyl releases instead of CD's, and a digital download is appreciated so I can have the music in a portable fashion as well (Heaven knows CD buyers can just rip the tracks for their portable devices, so the digital download is always appreciated).

So is Live (2016) worth the purchase? It probably can be best answered by the intensity of the buyer's fandom. If you need every Relient K release, there's enough incentive in having--and enjoying--Live (2016) that it's well worth picking up. However, for those looking for a high quality live Relient K album or a full evening's worth of music from their memorable fall 2016 "Looking for America Tour" set, Live (2016) is incomplete and not very satisfying. Still, it's one of those albums that is fun to experience and enjoyable to listen to, so fans on the fence about the purchase may want to snag one while they're available... while the rest of the fanbase can keep holding out for a proper live release from the beloved Ohio collective.