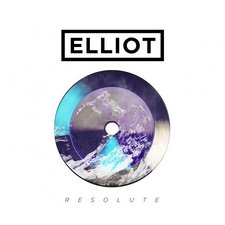 
The more die-hard members of the Petra fan base, or Petheads as they have affectionately become known, who followed the group's ever-changing cast of musicians back in the day might well wonder whatever became of Lonnie Chapin, the Oregon-born musician who handled bass guitar duties for the late, great rock band between 1996 and 2001. As it turns out, he's tried his hand at any number of endeavors, including a stint in former dc Talk vocalist, Michael Tait's, surname-derived band and even a slot as morning show host at a local FM station in Bend, Oregon, where he was raised.

These days, though, he's teamed up with fellow Oregonians Corey and Casey Parnell, Evan Earwicker and Michael Summers in the Bend-based outfit, Elliot. Equal parts One Republic and Hillsong United, the better portion of their debut album fits neatly into the increasingly-popular pop/worship genre that all but rules the Christian music airwaves as of late. Indeed, the soothing, mostly unobtrusive tones of cuts like "The Edge," "I Don't Walk Alone" and the title track should satisfy the cravings of those who favor the artists who regularly make their home in the Inspirational Top 20.

The far more engaging moments, however, come when the band veers to either side of the pop/worship milieu. The dance-oriented grooves of "Come Alive" and "In the Safety," along with the latter song's insistent rhythms and almost chant-like vocals, are sure to thrill fans of Control-era Abandon. On the opposite end of the spectrum, the poignant piano-based ballad, "Have All of Me" is an absolutely perfect melding of two genres, fusing pop's outward beauty to worship's inner reverence into something ostensibly familiar, and yet altogether unique. To be sure, it is hard to imagine a more moving note upon which to conclude the proceedings.

In fairness, the abovementioned tracks arguably position the project a notch above the average pop/rock effort from the quintet's contemporaries. And even the most standard pop/worship numbers on the release are raised incrementally above the norm thanks to the group's attention to sonic textures and details - a la the infectious low-twanging guitar tones found on the otherwise-ordinary "All of My Hope." But, while fans of pop radio will find Elliot's latest offering well on par with, or perhaps even slightly better than, that which they are used to hearing, for everyone else, the better approach would be to wait this one out in hopes that the small serving of more distinctive material on Resolute will become the norm on the next album, rather than the exception, as it is this time around.