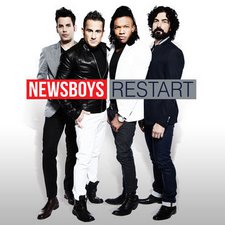 Since day one of Michael Tait's turn at the mic, the Newsboys have taken extra measures to try to define themselves. Album after album, the band forces their way into the conversation, and their method is no longer an experiment. And as a full-fledged project with a few years of experience both on the road and in the studio, the Newsboys have distanced themselves well from their former incarnation, and Restart is the next effort to achieve this effect - something it does very well.

Most assuredly, 2010's Born Again Special Preview EP was exactly the bombastic change that was needed for the Newsboys; while some goofy tracks like "One Shot" and "When the Boys Light Up" plagued the album from reaching its full potential, Born Again worked well to usher in a new phase in the band's career. Fast forwarding three years, Tait and the gang have solidified their style with gusto on Restart, keeping the energy alive while nailing down their concept to make it all their own. Tracks like "That's How You Change the World" and "Love Like I Mean It" authoritatively boost the sound above the contained space of the album, and the songs draw attention to themselves effectively, while "Disaster" and "Enemy" share a similar character with extra sensibility. "That Home" works as an especially heartfelt track, recounting Tait's experience with his caring, Jesus-loving mother and her example to him ("there was a home in town/broken kids, the lost and found/would come from miles around, just to see what love was all about/'cause momma had a way of making things okay"). "We Believe" serves as a memorable showstopper, detailing out a creed-style chant that victoriously details the Christian faith.

There are still some elements that don't translate well to a flawless listen, even if it's down to nitpicky elements. The title track's repetitive chorus of "You You You hit the restart" drags the track a little, while "Go Glow" seems to bite off a little more than it can chew with a chorus that doesn't truly fit the bounds of the notes. Further, a faint air of formulaic tendencies still rests in the album; it could be the slew of songwriters on the project (other than the band themselves) that keep the album less cohesive, but some songs feel very basic in their approach when practiced veterans would have tackled bigger challenges by now. "Live With Abandon," for example, works well as a lead single, but the elementary nature of the lyrics seems out of place coming from the lips of a CCM veteran like Tait ("chasing after this world makes me tired/praising my own name makes me dry/there's gotta be so much more life to this/a higher calling that I missed").

At this point, the Newboys could stand just a little more complexity to take things to the next level. In the Michael Tait era, however, Restart is the best the Newsboys have ever sounded. More sure of themselves than ever, the band expounds upon the last few years of their career, but they try just enough new tricks to keep the album distinctive. Comfortable in their own shoes and daring enough to stay interesting, the Newsboys are still a force to be reckoned with, and Restart is proof.

There comes a time when one starts listening to an album, and after the first song, pretty much all they can ask is, "What have I just heard?" In Restart, the latest from Michael Tait's incarnation of the Newsboys, I reached that point. It is no great secret that Tait's Boys have been progressively getting more poppy and electronic, but I could never have seen it coming for the Newsboys to venture into the realm of dubstep.

Now that said, the opener "How You Change The World" is the only song that really reaches that territory, but it is safe to say Restart is as dancy and electronic as I have ever heard a mainstream CCM artist, even putting TobyMac to shame. Yet, underneath all the production layers and electronic elements piled high, the album comes across as oddly satisfying. Each of the first three tracks, "How You Change The World," the title track, and particularly "Love Like You Mean it" is about as good as music can get when they sound like club remixes. In addition, "Disaster" and "Fishers of Men," while fitting well into the Boys' new electronic-heavy style, have a hint of the pre-Tait boys in their sound (particularly "Disaster"). But "Abandon" is about as generic as made-for-radio CCM can get (with, of course, a little electronic flair), "Go Glow" sounds equally like anything played on secular pop radio, and "One Word" is also obviously geared towards a radio audience (though it doesn't suffer nearly as much as "Abandon"). And in the middle of this dance revolution, all of a sudden we just hear Tait and a piano singing a Mark Scultz-ian story ballad about his mama and her faith (a relief from the dance production, to be sure, but nonetheless, an odd choice).

There is lots of good to say about this album, a lot of it being simply a full album of original, fully Christ-centered material made by some excellent musicians. The Deluxe Edition is also recommended, which, besides one Hillsong cover, is just as strong as the main album. But it's not for everyone's tastes, and not without some flaws. - Mark Rice, 9/8/13