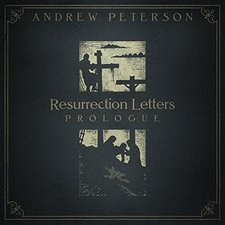 
The announcement of Resurrection Letters: Volume 1 a few weeks ago wasn't necessarily a surprise. Andrew Peterson almost obligated himself to create it ten years ago when he released Volume 2. But perhaps it is surprising that before we get Volume 1 (which will be an Easter-themed album), Peterson precedes it with a five-song prologue themed around Good Friday and the crucifixion. Then again, perhaps we might have expected something like this from a creator whose last album was called The Burning Edge of Dawn. "It felt odd writing about Christ's victory over death without spending at least some time on his death itself," Peterson said, "[so] that led to the idea of Resurrection Letters: Prologue." And so, with a release coinciding with Lent, let's take a look at Peterson's observations of the darkest day in history.

It doesn't take long for Peterson do something I don't think he's ever done, and something I don't think many artists have ever done as well. "Last Words (Tenebrae)" is about as simple in concept as a song can be: the final words of Jesus on the cross set to music. But it is the layering of the vocals that really sets this song apart. Opening with the words "Father, forgive them, for they know not what they do," Peterson repeats the forlorn and echoing cry while gradually more voices ("This day you will be with me in paradise," "It is finished," "I Thirst," and more) and more instruments enter in and repeat themselves until the song has built into a swirling, ethereal high, before everything fades away again. It is a beautiful song that perfectly captures the mixture of beauty and sadness that is Good Friday.

The rest of the EP is just what you would want and expect from Andrew Peterson (or anyone) when he is addressing somber material - telling a story of sadness with a dash of hope. As always, the lyrics are an uncanny blend of conversation and poeticism that few artists are able to write as well. The mellow piano-and-strings story-song "Well Done, Good and Faithful" contrasts verses of questions and confusion with a chorus lifted straight from Scripture that answers all those questions, "For the joy set before him he endured / And he's seated at the right hand of the throne / Well done, good and faithful one." The strumming opus "Always Good" is another song about reassurance in the face of questions, that "Somehow this sorrow is shaping my heart as it should."

Peterson's thoughtfulness is perhaps best expressed in the EP's closer, "God Rested." In it, he tells the story of Jesus' body being removed from the cross and placed in the tomb, but he describes it in parallel with God's rest on the seventh day of creation. Both events represent the same thing to Peterson - God has finished his task, and can now rest until he begins a new task. It is a fitting way to end the EP, and is actually a nearly perfect setup for the opening track for Volume 1, "His Heart Beats" (which - spoiler alert - may have already locked up the title for Song of the Year for me).

While listeners may long for more upon completion of this nineteen-minute project, it's hard to think of how Good Friday could be better and more-succinctly encapsulated than this Prologue. I half-wonder if the effectiveness of this project might even be reduced if Peterson did add more. After all, it will be fewer than two months before these five songs of melancholy are supplemented by nine songs of joy. Perhaps if one thing could be better, "The Ninth Hour" ought to have been fleshed out more into a full instrumental song rather than an under-two minute interlude, as it never seemed to approach the right mood for the song named after the moment of Jesus' death (at which moment the earth shook and the curtain was torn). It's enough of a drawback that it's hard to justify a five-star assessment, but I would not be honest if I said the thought didn't occur to me.

Fans of poetically biblical lyrics matched with contemplative music will definitely find Andrew Peterson's Resurrection Letters: Prologue to be a delightful addition to this particular style. The main issue with music like this is that most tracks can easily be overlooked, unable to adequately capture our attention span. Besides the deeply profound "God Rested" and the cleverly layered "Last Words (Tenebrae)," the other songs don't quite do enough to prove their necessity.

That being said, Peterson should be praised for his dynamic restraint throughout the EP's run time. There are a few swells and builds here that seem to lead somewhere grand but die down into something more serene. This creative choice certainly lines up with the lyrical subject matter, however, the peacefulness may also come across as a bit too optimistic in describing one of the more somber moments of our faith. As a prologue, these complaints may all be moot when connected to the upcoming palette on Volume 1, but we'll have to wait until the end of March in order to find that out. - Review date: 2/19/18, written by Mason Haynie

Before you can celebrate Christ's resurrection, you must acknowledge His death, and Andrew Peterson's Resurrection Letters: Prologue is a contemplative companion. The opener, "Last Words (Tenebrae)," takes a couple listens to get used to as the layered vocals make it confusing to follow at first. But the rest of this EP is a solid collection of tunes that examine the crucifixion from unique and creative angles. The highlight of this is "God Rested," using God's rest on the seventh day of creation as a parallel to Jesus' time in the grave. Aside from minor quibbles with the opening track, this is a great offering from Peterson that should be playing in the days as Easter approaches. - 2/12/18 John Underdown