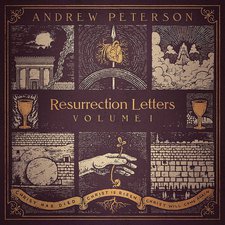 Ten years ago, Andrew Peterson confusingly released his seventh studio album (sixth as a signed artist), entitled Resurrection Songs, Volume II. It was a fantastic collection of songs that, while not necessarily a concept album, shared a theme from start to end concerning the Christian life as lived in light of Christ's resurrection. But "Vol. II?" Did we miss something? Well, in Peterson's words, "The songs I wrote for Volume II traced the ripple effects of the resurrection. They explored how it impacted my own life and hopes rather than being specifically about Jesus. I called it 'Volume II' because I knew there was a more fundamental part of that story still to tell. The whole church, the whole history of our faith, hinges on Christ's resurrection. But I didn't feel adequate to the task of communicating that [yet]."

Now, ten years later, Peterson apparently finally feels adequate to do exactly that with Resurrection Letters, Vol. I (or else, he finally stopped putting it off). Nearly two months after a stellar Good Friday-themed Resurrection Letters Prologue EP, we can feast upon a meaty collection of nine songs this Easter that encompass everything that is great about our faith, Christ's victory, and Andrew Peterson's artistry. And he wastes no time in doing so for all three.

"His Heart Beats" opens the album in an epic way. The style and structure is pure radio-hit-single stuff (even though it wasn't released as the album's lead single), but that immediate familiarity combines with some of the most vivid, poetic, and imaginative lyrics possible of life returning to a lifeless body, as well as skilled musicianship and songwriting completely devoid of filler - every drum beat, singing string, and hammer drop (oh yeah, the hammered dulcimer is a fantastic touch) is intentional and adds depth. The result is simply breathtaking, and I honestly don't think any other artist is capable of creating this type of song so well - I have not, and almost certainly will not, ever hear a better Easter-themed pop song.

Never again does the album reach such emotional, thematic, or poetic heights again (except maybe "Is He Worthy?"), but Peterson has certainly already left his mark. The rest of the album is a poignant and reflective musing on Christ's resurrection from a wide variety of angles. "I've Seen Too Much" is one that especially resonates. It is a testament of the persistence of the disciples that they had (ahem) seen too much to not talk to anyone who would listen about what they had seen and experienced. "Remember Me" is another memorable song that directly quotes both King David and the thief on the cross and perhaps a dozen other passages from across the entire Bible, and Peterson (or rather, Peterson's longtime producer and friend Ben Shive) expertly weaves them together into some of the most impressive lyrics in his whole catalogue. The communion-themed "Remember and Proclaim" and the second-coming-inspired "Maybe Next Year" are both solid entries as well, and "All Things Together" will probably make AP fans giddy with how it lyrically references the song "All Things New" from Volume II and how it fades out the exact same way that song fades in. But without a doubt, the call-and-response Q&A of "Is He Worthy?" is the highlight of the album's second half, and ensures that the album will end on a strong note.

Clocking in at a solid 38 minutes and coming off the heels of Prologue, it is easy to forgive the fact that this album contains a "mere" nine tracks (whoever said that a "full-length album" ever required double-digit songs anyway?). Of course, with each song being so well-written and well-crafted (which is par for the course for Peterson), it feels neither brief nor lacking. I think the album could have been improved a bit if Peterson had stretched a few more songs into new musical territory since most of the middle portion of the album seemed to stick with a bright folk-pop sound that could make its home on any number of Peterson's other works, thus making this particular one feel less special. But at the same time, I can understand that choice since it makes the album sonically tie in much more to Volume II. But overall, Resurrection Letters Vol. I is about as flawless as a 4.5 star-rated album can get. This album needs to be bought, heard, and adored by anyone with ears to hear.

Andrew Peterson is one of those artists whose music cannot be adequately described. Equal-parts contemplative, joyful, theatrical, and subdued, it's clear that Peterson is more interested in text-painting than sticking to a particular sound. That is the main reason why Resurrection Letters: Volume 1 is even more cohesive, engaging, and vitalizing than last month's Resurrection Letters: Prologue, effectively completing Peterson's musical vision for this pivotal time in history.

Peterson utilizes elements of gaelic folk, pop-hop, funky time signatures, piano ballads, gospel, and even 90s-style CCM to construct a decidedly united acoustic/electronic earthiness as the overall tone of the album. With all of these colors, it's possible that some songs won't stick as much as others, but they all serve the purpose of covering the emotional gamut associated with Holy Week. There are moments when certain songs feel a bit too overlong, but the abundance of musical triumph on this album make it an essential tribute to the victory of Christ's resurrection.
- Review date: 3/26/18, written by Mason Haynie

Not since Star Wars Episode 1 has a prequel taken so long to arrive, and unlike that abomination of a film, Andrew Peterson's Resurrection Letters Vol. 1 (and the prologue of songs that starts the action off) was utterly worth the wait. Ten years after Vol. 2 was released, this walk-through of the death and resurrection of Christ in epic song form matches Peterson's beloved work on Christmas, Behold The Lamb, with its nuanced storytelling and artful and epic songwriting. Kicking off with the haunting "Last Words (Tenebrae)", Peterson layers the seven last statements of Christ in a rhythmic and repeating melodic pattern that circles around and demonstrates Peterson's masterful touch with a phrase and a melody. Walking through the death of Christ on the cross and the heavy atmosphere of that day, the prologue deftly sets the stage for the triumphal following act. "His Heart Beats" leads the resurrection portion of the main album with a celebratory tune that ranks with Peterson's finest moment of songwriting. "Remember Me" (based on the words of the penitent thief on one side of Christ) and "I've Seen Too Much" show Peterson spinning well-known sections of scripture (Like St. Peter's confession of who Jesus truly was) into something new, with fresh angles and deep insight. With echoes of such classic songwriters as David Gray, Paul Simon and Peter Gabriel, Peterson's musical pallet is growing wider every time out of the gate. Andrew Peterson is so much more than just a songwriter at this point. With four novels, a thriving blog and a film to his credit (along with ten-plus fantastic albums), he's approaching C.S. Lewis territory with his poetic and beautiful exploration of faith and the human condition. Listening to both volumes of Resurrection Letters is to listen to a master at the height of his craft, diving into the most important and epic rescue story ever told. - 3/30/18 Alex Caldwell

At long last, Andrew Peterson has released Resurrection Letters: Volume 1. Lyrically, every song is a theological gold mine woven in catchy phrases and lines that elevate the lofty concepts in accessibly poetic ways. Musically, Peterson leans into the pop genre with mixed results. Occasionally, the songs feel repetitive or blended together, and certain melody lines feel like reused material from previous works. However, there are standout tracks that mix the words and music well, such as "Remember Me," "Rise Up" and "Is He Worthy?" Despite these minor flaws, this record makes a perfect companion to meditations on the resurrection of Christ. - 4/3/18 John Underdown