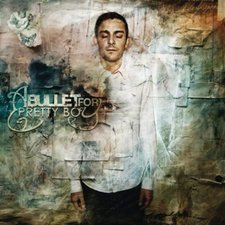 A Bullet For Pretty Boy
Revision:Revise

Post-hardcore/metalcore is an overflowing genre, that much is certain. While a few bands have a significant deal of talent, a few bands of the same genre also greatly lack it. Most bands occupy the middle ground: they're not completely terrible, but they don't reinvent the wheel. Enter A Bullet For Pretty Boy. While Revision: Revise is nothing special, it's a highly enjoyable and passionate album that's worth at least a listen, and, depending on your thoughts on the record, even a purchase. It's been done before, granted, but Bullet do generic much better than other bands do generic.

Indeed, as a package, the album is nothing you haven't heard before: there are breakdowns, heavily distorted guitars, screams and cleans, and experimentation with more melodic elements. For Bullet, this experimentation is programming/dubstep effects. This electronic element actually does work for the band, though, and adds a layer of variety to the half-contrived sound. Vocalist Danon Shaylor doesn't sound too much different from screamers like Jake Llhurs or Dave Stephens, but has an energetic and passionate delivery, switching between mid-range yelling/screaming and lower growls. Rhythm guitarist/clean vocalist Derrick Sechrist is a strong singer, channeling a mid-pitched range that's thankfully never plagued by autotune, and he's a truly talented singer. He's also a talented guitar player, handling a good deal of the typical chugging, and leading a lot of the breakdowns. One of the main highlights of Bullet is lead guitarist Chris Johnston: his creative mini-solos and riffs give the album another layer of variety, because he channels a different playing style than other guitarists in the genre. As you can guess, drums and bass are pretty typical: though the drumming is enjoyable, and the bass enjoyable when heard, it's just standard fare for the genre.

Standouts include opener "The Deceiver" for the double-bass in the beginning, the interplay between the chugging and the screams, and just as an overall energetic song and strong opener. The title track has enjoyable breakdowns throughout, and some great mini-solos/riffing throughout, while "Decisions" has an epic electronic climax. "Patterns" is strong because the entire band coheres very well throughout, while both "Only Time Will Tell" and "Vita Nova" have especially strong clean vocals. "I Will Destroy the Wisdom of the Wise" is an attempt at progressive metalcore, and though it isn't perfect, the transition from worshipful to heavy to worshipful to the heavy climax at the end works extremely well.

Both guitarists, the screamer, and the keyboardist are the strongest parts of the band: you can tell they especially crafted a considerable deal of the songs on this release. They don't ever give groundbreaking performances, but they sound strong in their roles. Both the bassist and drummer could step it up a little more, especially the bassist. Also, the sounds can tend to be a little similar after repeated listens, so replay value isn't the highest.

Lyrically, Bullet do uphold Christian beliefs, as they are a Christian band. However, other than final track, "I Will Destroy the Wisdom of the Wise," it isn't blatantly obvious they are a Christian band. Songs like "The Deceiver" and "Revision:Revise" are about calling out to God in trials, but don't explicitly mention His name. A Bullet for Pretty Boy have achieved enough ambiguity to not be totally offensive to non-believers, that's for sure. A Bullet for Pretty Boy have crafted a highly enjoyable, if a little generic, post-hardcore/metalcore album. While Revision:Revise is nothing groundbreaking, it's a great album.