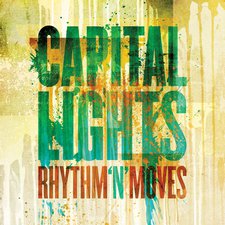 Capital Lights was somewhat of a small-scale sensation when they emerged on the scene with their 2008 major-label debut This Is an Outrage (They previously had an independent presence under the name After Eight). Their catchy, lighthearted pop punk style was hardly innovative, but it was tight, infectious, and simply good, clean fun. Much to everyone's disappointment, however, the band announced they would be breaking up a mere year after the release. This left fans wondering what could have been if they had been able to record more music. It was naturally a welcome surprise when we later found out that the boys of Capital Lights were returning to record another album. Four years after hearing This Is an Outrage, the band is back, releasing Rhythm 'N Moves to a flurry of high expectations. Unfortunately, it fails to meet many of them.

While This Is an Outrage admittedly focused more on the pop side of pop punk, Rhythm 'N Moves focuses on pop to a much greater extent. The album does start off promisingly, with the catchy title track sounding much like a return to form for the band. There's some nice pop rock guitars and a big melodic chorus. It's as much as can be expected, and seems to point to bigger and better things for the rest of the album. Sadly, it turns out to be mostly downhill from there. "Let Your Hair Down" introduces the new Capital Lights, and it's not an improvement. Instead of guitar-driven rock backed by a full band, we get cheesy electronic beats and sparse, radio-friendly production. "Caroline" takes it further, throwing in a depressing amount of autotune for good measure. The song is so programmed and synthesized that one wonders if the rest of the band just took the day off. Both tracks are certainly catchy to an extent, but they're cliche and stylistically empty to an extreme.

The album hits a high point at "Coldfront Heatstroke," which serves as a very welcome break from the radio pop void that was the previous two songs. In fact, it's the best song on the album, featuring the full band contributing to a pleasantly melodic rock track with perhaps even a hint of country influence. It perfectly demonstrates that Capital Lights works best as an actual band making traditional guitar-driven rock songs, which is the formula they used on Outrage, and is doubtless what most fans were expecting to hear again.

Sadly, any positives gleaned from "Coldfront Heatstroke" are soon forgotten once "Newport Party" starts spinning. It is not only the nadir of the album, but perhaps a symbolic representation of the Death Valley of radio pop music in general. Backed by a storm of autotune, synthesizers, and driving electronic bass, we learn that "A Newport party's not a real party until Laguna Beach bodies arrive. All the Riverside fellas lose their Cinderellas every night Orange County's alive." It's as cheesy a party song as one can possibly imagine, topped off by an absolutely atrocious guest rap appearance that seems almost like a satire. In fact, the whole track sounds like it could be a parody of party music in the style of early Family Force 5, but even as a joke it doesn't work. It's simply a regrettable experience all around.

The pattern of rock tracks alternating with electro-pop songs continues for the rest of the album, but even the rock songs get progressively worse. "Honey Don't Jump" has a sincere (albeit much overdone) message, but is delivered in a melody so generic, it's hard to remember once the next track has started. Meanwhile, "Say Hey!" comes close to being as bad as "Newport Party," even going so far as to include a cringe-worthy "shawty" reference. Even the better tracks like "Don't Drop Dead Juliet" and "Save the Last Dance" are much too generic and cliche to be truly memorable, even as simple pop songs.

It's hard to fight expectations, and high expectations were exactly what Capital Lights faced in their return. They seem to have made a conscious decision to change their style in an attempt to pursue popular success, even going so far as to openly state that they were seeking to write radio hits. While their sincerity is admirable, none of the changes implemented have been for the better. In the end, Rhythm 'N Moves is much less than it could have and should have been, and may go down as one of the bigger disappointments of the year.

Capital Lights brought us what many consider a masterpiece album back in 2008 with This is an Outrage, which led them to being labeled favorite new band of the year. Here we are exactly four years later with the sounds still fresh in our minds from that debut. If one is expecting straight forward rock like Capital Lights last release, they will be quite surprised by Rhythm 'N Moves. Those sounds have been replaced with more keyboards, with the songs having been toned down as well to a more pop sound. The style for the majority of the album sounds similar to the song "Miles Away" from their last record, while most of its lyrical content is along the lines of songs like "Let The Little Lady Talk" from Outrage. The album mostly talks about relationships ("Let Your Hair Down," "Rhythm N' Moves," "Save the Last Dance"), dancing ("Newport Party," "Say Hey"), and one song with a great message that tells a girl not to give up in "Honey, Don't Jump" ("Honey don't jump the gun / there's a life worth living for / when the world comes crashing down / in God's Arms your safe and sound"). Capital Lights fans will still find some songs that will satisfy them, like "Rhythm N' Moves" and "Coldfront Heatstroke," however, songs like "Newport Party" seem too awkward on this record. The band does provide an extremely catchy 80's throwback sound in the song "Caroline," which is completely different and is one of the highlights on this album, with its simplistic-yet-catchy and memorable lyrics and sound. I think Capital Lights wanted to do a little bit of experimenting, as well as have some fun on this release, and their fans will find something they enjoy on this record, while the new sound could generate new fans. Unfortunately, as good as some of the songs are here, it makes you want to go back to listening to This is an Outrage and anticipate once again that Capital Lights may some day create another album that can equal or exceed their memorable debut. - Wayne Myatt, 7/15/12