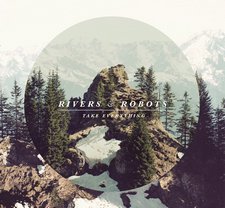 
Rivers & Robots, a band from Manchester, UK, strives to craft a sound that is comprised of both flowing acoustic arrangements (Rivers) and pulsating electronic vibes (Robots). What makes them even more intriguing is that they are also a worship band, and on their first full-length album, Take Everything, Rivers & Robots make their mark in a fresh debut that with every song marvels at the many characteristics of God.

The album begins with "You Saved My Soul," a pleasant and cheerful opener that serves as a good introduction to the sonic landscape of this album with its many percussive elements, reverberating bass, and ethereal background harmonies that feature throughout many of the songs on this album. This track is followed up with "Uncreated One," the first real indication of the true potential of Rivers & Robots, a fascinating and breathtaking dream-pop number that dwells on how The Lord is both awe-inspiring and approachable.

While the album begins with a decidedly dream-pop sound, Rivers & Robots become more adventurous and ambitious with their sound the longer the album goes on. "Silver" is the first real deviation from the established sound with a more intimate and pared-back arrangement, and from then on, R & R change their sound from song to song in a thoroughly engaging exploration of the many characteristics of God. Highlights include "The Judge," a 7-minute fleshing out of everything the first half of the album did well, the upbeat and joyful "Fountains," and the aforementioned "Uncreated One."

If there is a major criticism of this album to be found, it's that this album is drawn out. Almost all the songs are at least 5 minutes long, with the final three songs having an average run time of 7 minutes. While this sometimes allows for satisfying progression, occasionally it gives a feeling of redundancy and repetition, making many of the songs on this album a tough sell for time-sensitive listeners.

Nevertheless, Rivers & Robots have crafted something unique within the Christian Music industry. This is an ambitious and quality debut that, at times, drags but is for the most part a rewarding listening experience.