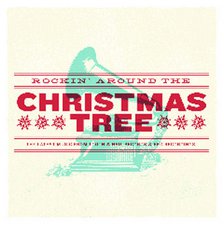 My favorite genre of Christian music is what I call Heavy Christian Rock (Project 86, Disciple, Thousand Foot Krutch, Sent By Ravens). So, when I got my hands on Rockin' Around The Christmas Tree for Christmas, I was ecstatic.

August Burns Red's metallic version of "Carol of the Bells blew" me away, and is still one of my favorite versions of the song today. Although not an Anberlin fan, their take on Darlene Love's "Baby, Please Come Home" was interesting, and I loved the lead singer's vocals and the techno-rock take on the song. Rolling in as the third track is Christian Rock group Thousand Foot Krutch's cover of "Jingle Bell Rock," literally putting meaning to the rock part. The guitar at the beginning and vocalist Trevor McNevan's screams made this classic song my favorite. "O Holy Night" by Ivoryline disappointed me, and the song just seemed boring and repetitious; I had the same feeling for "What Child is This" by The Museum. Heavy rock group Sent By Ravens shook me out of the funk with their rocking version of "Happy Christmas (The War Is Over)," which is probably my all-time favorite Christmas song. "Little Drummer Boy" by The Almost is amazing as well, with a great drumbeat (as implied) throughout the whole song. Gillespie's vocals were clear and cutting at the same time. Seventh Day Slumber's "Away In A Manger" has a slow start, but soon I found myself getting into the paced, harmonious beat. As implied by its title, "The Wind" by Demon Hunter" cut into my Christmas library, and the dark, brooding song was a new approach to Christmas music--complete with pounding drums, hammering guitar, and killer vocals by Demon Hunter's Ryan Clark. Ironically, I just became a Capital Lights fan, and "His Favorite Christmas Story" ranked as one of my favorites on this album. The sound of Bryson Phillips's vocals impressed me and the topic of the song is really moving; this song will definitely be a classic in the future. The end of the album disappointed me, as I am not a big fan of rap or pop, and Family Force Five mixed these together, in their rendition of "Angels We Have Heard on High." But, I'm more of a head-banger, so that's probably just me.

There were some other things that disappointed me. Christian Hardcore band Project 86 released a Christmas album in 2008. This album came out in 2011. Although this album was simply a compilation of Christmas songs, I believe at least one song from P86's album could've been featured on this Christmas compilation. Relient K released a Christmas album in 2007 and 2008. They're not signed with BEC, who released this album, but their version of "Angels We Have Heard on High" could've replaced FF5's version and fit much better.

That being said, Rockin' Around The Christmas Tree is a great Christmas album. I have never heard an album like this before, and a second volume would be excellent.

Well, it's been a while...since these songs came out. Even though BEC's Rockin' Around The Christmas Tree compilation came out last year, the majority of the songs selected had still been out for several years. Every single one of the songs on this list have been previously released on a Tooth & Nail or BEC compilation, whether it's X Christmas, an installment of their Happy Christmas series, or the previous year's O Come All Ye Faithful: A Christmas Album. This is a pretty good selection of Christmas songs, but I'm perfectly fine waiting two or three years between Happy Christmas installments, where I get (mostly) new recordings. If you're an alternative Christmas music fan, you probably already have all these songs. Save your money and pass it up. - 12/24/12, Scott Fryberger of Jesusfreakhideout.com