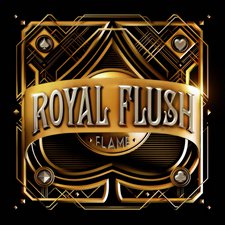 In today's CHH community it seems like Reach Records takes the lion's share of the media and fan attention, and artists like Lecrae are highlighted above all others. While Reach has definitely been releasing solid rap and hip-hop albums, Clear Sight Music is home to a different 116 alum. Flame is following up his solid outing The 6th with an even better entry into his discography with Royal Flush (the highest possible hand in poker). While Flame has definitely had success, with several Stellar and Dove award nominations to his name, it seems this industry titan is still wrongly overlooked by some. The talented rapper is dropping his seventh album and in his words, "He [Jesus] set us up to win. We've got the highest hand. If you're not a Christian, you can receive the Royal Flush through Christ."

Flame opens things up with Serge on the anthem "Break the Building." It's the perfect opening song and it sets the tone for the rest of the album. "R.I.P. to the old me," kicks off the KB-featured "All In." The lyrics Flame raps in the opening verse explain what Royal Flush is all about with a complete poker analogy, "Got a ten, got a jack, queen, king, and ace; that's a royal flush (If you ain't know). What that mean, man, what that mean? Rally 'round me, man, ven aqui. All that mean is King Jesus gave us everything on that tree. Gave us everything when He died. Gave us the winning hand when He rose." It's a track that embodies what the album is about and is guaranteed to please. "Sanctuary" features Mike Real and a club feel and is another impressive track. One of the album's best has to be "Game Over." It also features a slight club sound with Flame spitting fast and tight. The song really opens up as it slows for a section that is similar to a breakdown in nature. The slower "Maranatha" shows an honest side of Flame who raps about this struggles and prays, "Have You forgotten, have You forgot me? Lord, have You forgotten, please remember me. Oh, Lord, maranatha (an Aramaic word roughly translated 'come, o Lord')." After this is a two and a half minute mini-sermon by Ryan Fullerton.

V. Rose's huge voice can be heard clearly on another stand-out track in "Read Em & Weep," however, it's a bit disappointing that she was only used once this time around. On "Stackin," Flame talks about the love of money and dangers therein. In the intro he says, "Man, it's deep. It's deep when you think about how much people love money. It's almost like they're in a romantic relationship with it." After "Stackin'" comes what is probably the best song on the entire album. K-Drama and D-Maub bring it hard with Flame on "Mixed Up." This banging track should cement your love for this album, especially when D-Maub takes the mic and raps at a breakneck pace for the best guest appearance by far. There's no doubt that when he drops the line, "So living for G-O-D is the safest route. Dum-dilly-dilly-dum-dilly-dilly-dum; wisdom, we got it so come and get you some," a smile will come across your face. Another Ryan Fullerton message follows that is possibly more powerful than his first. Finally, this fantastic album comes to a close with the NF-featured "Start Over." The lyrics are deeply personal to Flame and speak of second chances found in Christ no matter what you do. From the soulfully sung lyrics to the intimate raps, "Start Over" is an enjoyable song and the perfect cap to Royal Flush.

Flame is on top of his game and is releasing what will arguably be his best album to date. Royal Flush brings a positive message of what God has done in the life of a Christian and the promise of what He can do in the life of a non-believer. While Flame is nowhere near an unnoticed commodity, hopefully this album will garner him some award wins and not just nominations; it's definitely good enough. There are still three months to go before December, but all appearances are that Flame has released the best hip-hop album of the year with Royal Flush, not to mention one of year's best in general. Sure, it may be cheesy to say, but Flame is definitely on fire.

For those who are really into the Christian hip hop scene, Flame has become a household name. Royal Flush will be the St Louis native's seventh album in the last nine years. Flame has been known to drop hot beats with Christ-filled content, and this album is no different. "Break The Building" starts off this release solidly and exactly as expected, with the next few tracks following suit. "All In" gives the picture of completely being the new man in Christ that we are, and in "Sanctuary," the hooks shout "Let me see them hands and watch us turn this place into a sanctuary." Later on, labelmate V. Rose and Flame collaborate perfectly on the stellar "Read 'Em and Weep," and the best production on the whole release can be found on the fine-tuned "Mixed Up." Ending the album is "Start Over," a simply awesome song that is very personal with a soft rock anthem flavor.

Not all is so hot, however. "Sleepin" has an overly repetitive vibe, a drawback that unfortunately creeps into many rap albums. "Believe" is on-point thematically, but the song seems jumbled and messy. Finally, some other songs are decent without bringing anything great or bad. For the most part, however, this is a good hip hop album with stellar beats and Christ-centered substance. Even though this may not be his best work to date, fans of Flame or rap in general will likely enjoy this release. - Kevin Hoskins, 9/29/13